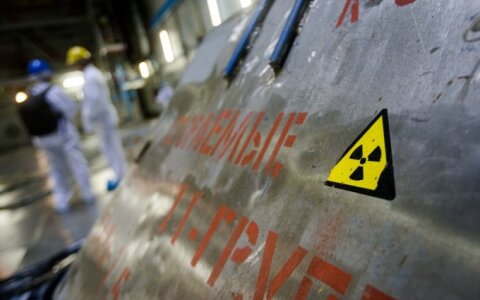 Lithuania intends to follow in the footsteps of other European countries in strengthening the protection of its population against a possible nuclear accident.

Residents of 14 municipalities nearest the new Belarusian nuclear power plant would need to take iodine tablets that protect the thyroid from radioactive iodine exposure in case of an accident, according to experts.

“It has been discussed in a special working group about the steps for preparing for the nuclear power plant being built near the border on the Belarusian side - the existing national nuclear emergency plan will have to be adjusted. Other European countries are changing their plans in light of the Fukushima accident,” said Lithuania‘s Radiation Protection Centre Director Albinas Mastauskas.

“14 municipalities are within a 100km radius of the nuclear facility, thus a mechanism will be required to get the iodine preparations. They must be ordered specially, since the dose depends on the age of the person. The next task is to distribute them in a way that people can pick them up as soon as possible, preferably before the intake of radionuclides into the environment,” said Mastauskas.

Mastauskas said iodine was just one of the preventative measures that could be used in areas near nuclear facilities, with evacuation and sheltering the other options.

In Belgium, to protect residents from any accident at nuclear power plants at the Belgian border the Belgian government purchased stocks of special iodine which prevents radioactive iodine isotope from getting to the thyroid gland. This was also done in Netherlands.

Lithuania is worried about such danger from Belarus‘ new nuclear plant as the first reactor at Astravyets should start opearating in 2018, with the second one coming on stream in 2020.