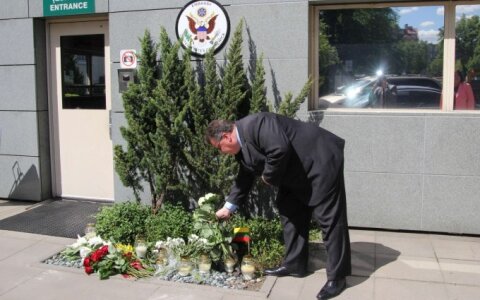 Lithuania's Foreign Minister Linas Linkevičius and Vilnius City Mayor Remigijus Šimašius laid flowers outside the US Embassy in Vilnius on Monday in sign of tribute to the victims of the Orlando shooting.

Linkevičius declared Lithuania's "commitment to work with the United States and the free world in fighting terrorism in any shape, in any form."

The minister emphasized that members of the LGBT community were "our equal fellow citizens, they are someone's sons, daughters, brothers and sisters".

Meanwhile Šimašius said that "any form of hate and attempts to solve problems with violence are inhumane".

An attacker in the Pulse gay club in Orlando, Florida, shot 49 people, leaving dozens more severely injured in what was the biggest shooting in recent US history in terms of casualties.