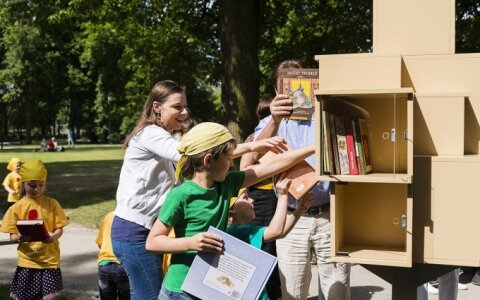 It is the latest addition to 40,000 of community libraries where people can borrow and donate books for free. Vilnius already boasts nine of these, Kaunas has five and five more are located elsewhere. This little library, installed close to the children's playground, specialises in children's books.

A grass-roots initiative to makes cities and communities more sustainable and liveable, the little libraries rely on citizens to get involved and have a say in what is on offer. Anyone can take a book, return it, or leave another book in return.

The Bernardinai library got a substantial boost from the Embassy of The Netherlands. Vytautas Gečas was commissioned by the Embassy to design this little library. Mr. Gečas, a young Lithuanian designer, studied at the Design Academy in Eindhoven, the Netherlands. For this project, the Innhotel in the central Dutch town of Zaandam, served as a major inspiration. Mr. Gečas designed the library for various sizes of books and end-users.

The Dutch Ambassador to Lithuania, Bert van der Lingen, has made interaction with local communities one of his key activities. The ambassador thanked the designer, but also Mr. Laisvūnas Budėnas, director of the park, for making it all possible. Ms. Daina Urbanavičienė, the initiator of the Cultural Night festival (Kultūros naktis), in her speech thanked the Dutch Embassy for making this one of the opening parts of the yearly cultural event, this year on 17 June.

Urbanavičienė said, "We are particularly delighted by our reliable relationships with partners such as the Royal Netherlands Embassy. City festivals are not only momentary or one-off events in the city, it is a collective biography of the city's history and the events that capture the city's identity."

She added, "As we are days away from the "Culture Night" event, the small and unique library is a meaningful gift to Vilnius city promoting reading activities during the whole year. She invites and encourages families to fill the library and borrow collectively books."

Next to the library is a 'Berit Chaise double' by well-known Dutch designer Ineke Hans allowing for a relaxed read in a green setting.