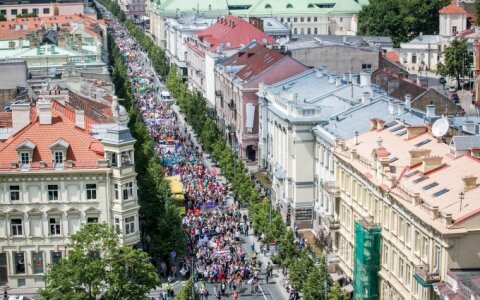 Around 2,000 people joined the pride march For Equality on the Gediminas avenue in Vilnius on Saturday in a massive show of support to the Lithuanian LGBT community.

“I think that Lithuania has just moved closer to European values. I am very happy that everyone supported us,” said the head of the Lithuanian Gay League, organizer of the pride march, Vladimiras Simonko.

The police have estimated that between 1,500 and 2,000 people joined the pride march on Saturday afternoon.

It did not encounter any significant incidents, although the police detained six individuals who were all released after the event.

A small group of protesters were present in the Cathedral Square.

It is the third time that Lithuania's LGBT community has staged a pride march. The first one took place in 2010 and had faced massive opposition from conservative groups and politicians.