Why are Lithuanians paying the same prices for goods as Germans? 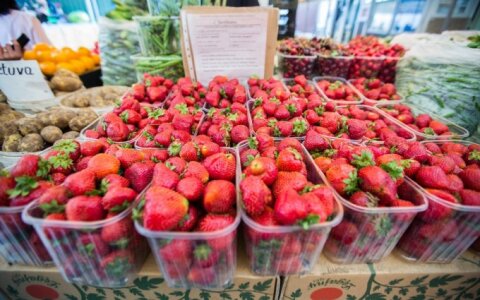 Germans earn about five times more than Lithuanians, but the prices of goods in these two countries appear to be now almost the same. How could that be the case when there is such a differential in wages?

Ugnė, a Vilnius resident visited Berlin recently, and reflected on the prices there. Ugnė spent her long Joninės weekend in Berlin and said: “I had been in Germany long ago and remember it as a country that was far more expensive than Lithuania, but this time, I was totally stunned. Both I and my friends who traveled with me admitted that Berlin had become cheap for Lithuanians.”

Though some restaurants there were more expensive than in Lithuania, Ugnė also said that at least Germans could choose between eating for less or more.

“We unexpectedly found a Sudanese vegetarian cafe in the Kreuzberg neighbourhood where falafels in a pita cost €2.50. By the way, I should also add that the portion was about twice as big as it is at the new falafel place on Vokiečių street in the capital,” said Ugnė, a resident of Vilnius.

Ugnė also pointed out that, in most bars, beer cost €2.50, but that water in Germany could be more expensive than in Lithuania. “In some small stores, [water] cost up to €2 for a litre, but in chain stores, you could get it for €.50.”

She was most surprised by flower prices. “When I saw a sign saying that 10 roses would cost only €3, I couldn't believe it. I went closer because I thought I was seeing things. When I took a closer look, I thought that perhaps I had forgotten the German I had learned in school and that I had misunderstood something. I started to look at other flower prices: the largest and most expensive rose cost €1.20.

The EU's statistical agency, Eurostat, indicates that, in 2015, the relative price level in Germany was 99.8% of the EU average while in Lithuania, it was 62.7%.

It is worth mentioning, however, that compared to Lithuania, services in Germany are more expensive than products.

Why are flowers cheap?

However, these statistics only show a general price level for all products and services. Certain products can be outliers.

A good example is the flowers that Ugnė mentioned – which have become about 10% more expensive over the last year in both Lithuania and Germany.

Žygimantas Mauricas, head of the Nordea Bank Lietuva baltic research division, almost all flowers in Europe are grown in the Netherlands or imported through there.

“As such, Germany, being closer, saves significant costs. Transporting the same flowers to Lithuania takes longer,” he explained.

With one of the main determinants of the price of flowers the place where they are grown. Wholesale flower trade company "Royal flowers' manager Andrius Laugalys said "If the roses are grown in Lithuania, it‘s possible to buy 10 for €3 but if they are shipped from Holland and Ecuador, it is not very realistic [to expect to get the same price as Berlin].“

Maricas suggested that Lithuanians surprised by prices in Germany and Poland needed to think differently.

“I'd suggest that Lithuanians think more about how to earn more rather than how to save money,” he said.

The economist predicted that in the future, as the country's wages grow, Lithuania's prices will become more similar to those in the Scandinavian countries – meaning, higher than in Germany.

“Due to the size of its market, Lithuania has no competitive advantage or economy of scale,” said Mauricas. “Therefore, these international products have a high chance of having higher prices in Lithuania than in Germany.”

He also said that lower wages were not an argument for lowering prices.

“Why should a TV made in South Korea be cheaper in Lithuania? If anything, it should be more expensive since it is harder to transport it. They are brought to the largest European ports – Rotterdam, Hamburg – unloaded there and only then are they distributed elsewhere, and all of this costs money.”

While the call for Lithuanians to earn higher wages may sound a bit Marie Antoinette-like in a country with some of the lowest wages in Europe, it is clear that the higher price of some imported products may be down to distance to market and a lack of economy of scale.

Neither is there any reason why electronics products from Korea would be significantly cheaper here, although given the lower standard of living in Lithuania it would be expected that labour costs and ground rents for retailers would be much lower in Vilnius than Germany.

A retailer like Lidl has shown that lower prices can be achieved in Lithuania through increased competition and that a lack of competition in the retail market is a major contributor to prices that are higher than they should be.

The prices being charged for basic fruit and vegetables earlier in the year that sparked the cauliflower revolution, have now mostly disappeared with increased competition - cauliflower that were €3.49 each are now priced at as little €0.99 and strawberries retailing at €9 a kilo are now retailing in markets at as little at €3 a kilo, showing that price gouging is a real driver of prices of goods in Lithuania where a lack of competition exists.

There is also another factor at play. In every country where the euro has been introduced prices rose by a fifth, and sometimes even more, in the following year as retailers took the opportunity to ‘round up’ prices.

Only a broad-based and prolonged recession, increased competition, and consumer action (changing shopping habits) led to these prices retreating in many eurozone countries. For Lithuania, only the first and last are desirable options in the absence of government intervention, but both are also entirely possible if the right levers are used.

Consumers irritated by what they see as high prices can play their part by making sure to shop around while government can make sure the conditions are right for other retailers to enter the market and increase competition in Lithuania's retail market.

Why are Lithuanians paying the same prices for goods as Germans?