'I fear for Russia's future' - Sokurov in Vilnius 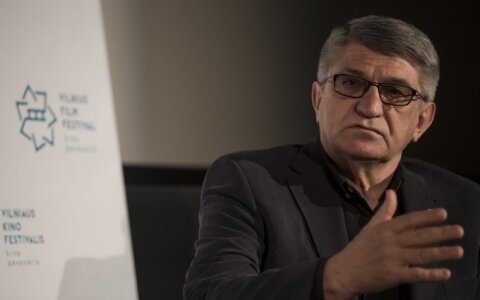 With anti-democratic sentiments growing among the Russian population, Alexander Sokurov, a prominent Russian filmmaker, says he feels great concern about his country's future.

"We are faced with a difficult political situation in view of the strong anti-democratic sentiments not only among politicians but also among people, there is no will to fight for democratic principles," Sokurov said in Vilnius on Tuesday.

"Restructuring and changes that were launched during the rule of Boris Yeltsin have run out of energy. Therefore, I feel a great threat for my home country and its future."

Sokurov said he was not a mutineer or an opposition activist and generally not involved in politics, but his vote during elections went to the the Yabloko opposition movement.

In his presentation of his latest feature, Francofonia, Sokurov said that he spoke about possible Russian military conflicts in Ukraine and Kazakhstan and two more regions eight years ago. However, he said he had no fears about the Baltic states. In his words, tensions first arose among the Ukrainian population that faced "the enormous culture that was too difficult for the neighbours".

Francofonia tells a story about the Nazi rule of France and efforts to preserve a huge art collection in the Louvre museum. In Sokurov's words, the film has no links to Russia, except for the fact that life in Russia and the Soviet Union during and after the war was far more difficult and cruel than in the Western world.

'I fear for Russia's future' - Sokurov in Vilnius