Lithuania's brain drain: 'Some professions are trained for export' 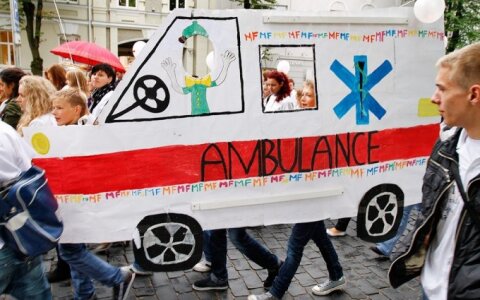 Emigration has been a perennial headache for the Lithuanian government and businesses for more than a decade now. Departures of young and educated people are a particular drain on the country's resources.

Statistics Lithuania has recently released alarming figures: 23,000 people emigrated from the country between January and June this year, 6.5% more than over the same period last year. Most of them are young working-age people, 52% between the ages of 19 and 34.

The agency does not collect information about the education and training of the migrants, but anecdotal evidence suggests that there are professions where students do not even consider staying on in Lithuania.

Medical students are among them. Several years ago, deputy chairman of the parliamentary Healthcare Committee, Antanas Matulas, intimated that as many as 75% of medical residents were planning to look for jobs abroad once their training was over. Today he says the share is lower, but doctors and nurses continue to look for better-paid positions outside Lithuania.

Related articles
Bank of Lithuania forecast – how will we live next year?

"I know personally a number of medical professionals who found a job abroad. The extent of emigration is still huge, young people find it relatively easy to learn a new language," Matulas says.

"We feel catastrophic shortage of some medical professions: neurologists, oculists, cardiologists, trauma therapists - especially in periphery, towns like Biržai, Pasvalys, Pakruojis, Šilutė or Šilalė. The same is true of nurses - we train them well, but they leave."

"I recently visited a hospital in Belgium, not that far from Brussels. Its chief told me that they employed 24 professionals, doctors and nurses, from Lithuania. And that was just one hospital!" he says.

The bleed has somewhat abated over the last few years, he adds, after funding was made available to pay grants to medical students and cover their social insurance. Matulas believes that doctors should be paid premiums for working in peripheral hospitals. Moreover, the state should be compensated after investing into the training of doctors who leave the country after graduating.

Another survey, carried out by the Lithuanian Employers Confederation, suggests that over 70% of students in vocational schools are planning to look for jobs in other countries. The survey interviewed 800 out of about 19,000 vocational school students.

Vaidotas Leviskis, deputy president of the Employers Confederation, says that welders in particular feel that their profession is in high demand in Western Europe.

"These specialists hardly stay on in Lithuania, although they are offered very decent salaries even here. Construction workers and finishers are also emigrating en masse," he explains.

Why are they leaving? Levickis believes the answer is straightforward - they can expect three or four times better pay.

"Naturally, young people who are not attached to families or homes are free to move where they feel their skills are better valued," he says.

This is also true of graduates of chemistry, biopharmacy and IT programmes, Levickis notes.

Laura Stračinskienė, deputy director of the Research and Higher Education Monitoring and Analysis Centre (MOSTA), says that, paradoxically, raising standards at Lithuanian universities made it easier for graduates to emigrate.

"Both higher education and scientific research must be relevant in the broad sense of the word - for the society, for economic development and so on. We live in an open system, foreign capital is coming in, there's intense cooperation with other countries. Especially since we've introduced various European standards into our education programmes. As a result, our graduates have more opportunities to move around," she says.

Paulius Baltokas, the president of the Lithuanian Students Union, agrees. He says particular professions have less to do with emigration than students' personal preferences.

"I do not believe it [propensity to emigrate] is linked to any profession. It depends on the person," he says.

"Say, there's a shortage of doctors in regions, but not because of emigration, but because they fail to offer anything decent. I know of places, like Mažeikiai and Naujoji Akmenė, that are doing well and successfully entice the specialists they need to come by offering accommodation and additional social guarantees. This is how they do things throughout Europe - if you cannot pay more, offer other perks," the Students Union president believes.

He adds that other small countries have to deal with similar problems, like the Czech Republic.

"However good their professional training, there's Germany across the border where everyone go in search of better wages," Baltokas says.

He adds that Lithuania's main problem is that the state takes too little interest in what happens to graduates after they leave universities and colleges.

"Only recently did they start paying any attention," he says.

The Lithuanian Students Union has not conducted any comprehensive surveys about students' views on emigration, he admits, but adds he has seen positive developments.

Lithuanian graduates of foreign universities come back to continue studying in Lithuania, he says.

"This year, there have been a number of students who previously studied abroad, but are applying to Lithuanian universities. And, from what I know, they have good marks," Baltokas says.

Lithuania's brain drain: 'Some professions are trained for export'