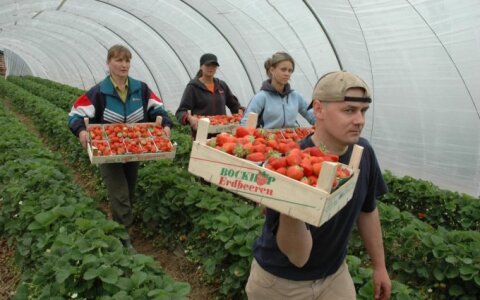 While the stereotypical perception of emigration in Lithuania holds that most emigrants are low-skilled labourers toiling in the agricultural farms of Norway or the UK, the reality is much more complex, experts say.

“Economic reasons are the most frequent motivation to emigrate, but it is a stereotype that Lithuanians are leaving Lithuania due to low wages. There are those who depart to gain knowledge, experience and to find ways to improve themselves. Professionals depart to work in larger companies and to gain experience,” said one of the chiefs of Public Policy and Management Institute Egidijus Barcevičius.

He does admit that highly qualified individuals do sometimes end up working low-skill jobs, but that is often to establish themselves before moving on.

Emigration is also having a major impact on the statistical perceptions of Lithuania, with roughly 4% of the country‘s GDP being from expatriate cash transfers. While this is a decreasing trend, this is even more than the EU contributes. Emigration causes Lithuania to have one of the best convergence indices of all the new EU member states. Furthermore, unemployment, including youth joblessness, is significantly lower than those of other Eurozone states.

Related articles
Bank of Lithuania forecast – how will we live next year?

While this may look good in statistics sheets, it relates to deeper demographic problems that could flare up later. If emigration rates such as this continue, by 2050 Lithuania will have the same population count as Latvia, while supporting pensioners will become increasingly difficult.