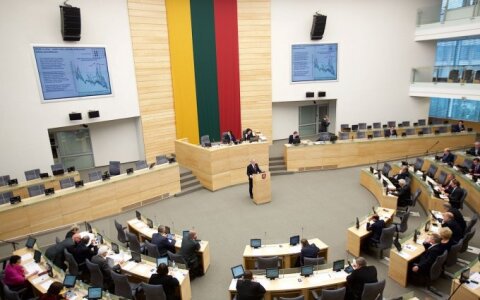 With less than a month remaining to the Seimas elections and the Social Democrat Party remaining ahead in polls, DELFI speaks to several experts on how the current circumstances could be evaluated.

So far the experts do not expect any particular surprises to occur in the time left running up to the election. “There have been no significant changes in the general party ratings since the fall of the Liberal Movement and the rise of the Lithuanian Peasant and Greens Union. The appearance of the coalition of N. Puteikis and K. Krivickas is interesting, but it is currently difficult to say much about their potential at the moment. Last elections the Way of Courage had similar ratings and somehow managed to enter Seimas,” commented Vilnius University Institute of International Relations and Political Science (VU TSPMI) docent Mažvydas Jastramskis.

The head of Spinter Research, a company regularly organising political surveys, Ignas Zokas notes that the interesting events only started happening with the arrival of autumn and the explosion of the so-called army utensils scandal. Nevertheless he is unsure what sort of impact this will have. The Ministry of National Defence is headed by a Social Democrat, but with a number of theories circulating in the public sphere even the President firmly pointing her finger at Minister of National Defence Juozas Olekas may not have a meaningful impact on Social Democrat ratings. Instead Zokas thinks that the Social Democrats will continue struggling with the conversion of their potential into actual votes, with many of those supporting the party having little interest in politics.

Public relations specialist Arijus Katauskas is fairly certain the army utensils scandal will impact the Social Democrats, the question is only whether this will envelop the entire party or remain localised around J. Olekas. In his opinion it is particularly problematic for the Social Democrats that the scandal is continuing and their competitors are highly likely to fan the fire in order to keep the scandal alive into the election period.

On the topic of disgraced former Chairman of the Liberal Movement Eligijus Masiulis who withdrew from politics following a scandal based on suspicions of graft, I. Zokas points out that Masiulis’ former party started off well, particularly with Masiulis initially withdrawing from the limelight. His return and the defensive statements that followed, paired with responses from senior party member Eugenijus Gentvilas have done a disservice to the Liberal Movement according to the expert. Zokas believes that the party would have been better off distancing itself from its former leader completely. The picture is not completely bleak for the party however, with the sociologist pointing out that “<…> there’s potential yet, it hasn’t vanished anywhere, but it is currently far more sensitive to any information,” in reference to the roughly 10% of the electorate that is linked to liberal views, mostly young voters.

Meanwhile A. Katauskas believes that Masiulis’ public appearance was beneficial for the party because this has helped further separate him from the party, thus rather than embroiling the party further, it serves to help them break away from the scandal.

Katauskas draws parallels to the Seimas election in 2008 where Social Democrats were the core of the coalition government, a crisis was right around the corner and the then PM Gediminas Kirkilas was facing heavy criticism. While the current PM Butkevičius may be more popular than Kirkilas was back in 2008, the cabinet that he leads is notably unpopular with 59% of respondents evaluating the work of the cabinet negatively. According to the public relations specialist in this case instead of the now defunct National Resurrection Party, it will be LVŽS playing kingmaker and choosing between TS-LKD or the Social Democrats. He stresses that while LVŽS have stated they will not be forming a coalition with the Social Democrats, only time will show.