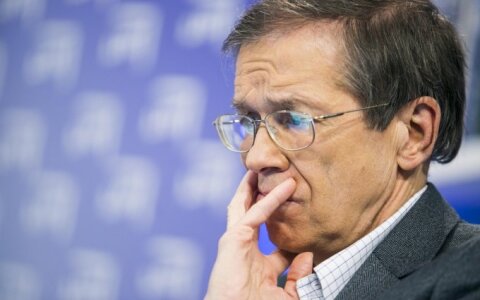 On the evening of September 13 a political debate featuring the top five largest Lithuanian parties was broadcast on LRT Television. The topic of the debate – economics. The debating parties were the Lithuanian Social Democrat Party (LSDP), Homeland Union-Lithuanian Christian Democrats (TS-LKD), Lithuanian Peasant and Greens Union (LVŽS), the Labour Party (DP) and the Liberal Movement (LS). LRT.lt interviewed a number of political, economics, business, law and public relations experts and asked them to rate party performance from 1 to 5.

Kęstutis Girnius Associated Professor of the Vilnius University' Institute of International Relations and Political Science found the first large party debate fairly chaotic with little time being given for statements and participants interrupting one another, thus making it tough to keep track of the discussion.

The Liberals and “Peasants” earned the political scientist’s highest marks with both earning 4 points. The Liberals earned their points through E. Gentvilas’ clear and convincing explanation of the party position, which while not favoured by the expert was done successfully. Girnius was offered a pleasant surprise by the leader of the “Peasants”, Skvernelis. The expert found that Skvernelis’ response to the first question was weak, but he later made a comeback. Praising the party’s rare act of offering concrete plans, such as a combined 29% tax instead of a number of smaller ones separately, the political scientist’s gave the “Peasants” 4 points.

The remaining three parties earned 3 points each. Girnius notes that the LSDP needs to make some distance from the past and focus on presenting what they plan to do in the future, also pointing out that PM Butkevičius also had to defend his cabinet. The political scientist acknowledged that Labour’s Daukšys is no great orator, thus focusing on repeating well known statements. Girnius found the party’s focus on the impoverished praiseworthy, particularly the recommendations of VAT reductions for food and medicine, which is common practice in the West. The Conservatives were found to be very active and very critical, particularly of the LSDP and PM Butkevičius, while not offering any ideas themselves, furthermore having a touch of demagoguery on the topic of emigration. Nevertheless, Girnius gives them 3 points as well.