ELECTIONS 2016: New opinion poll shows reshuffling at the bottom of the parties’ list 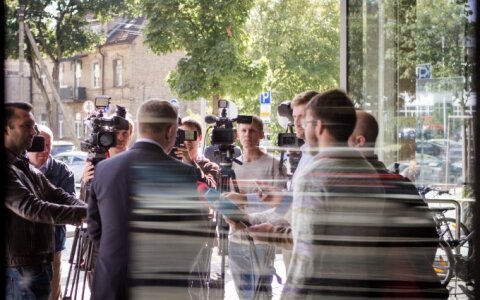 With the corruption scandal revolving around former party chairman Eligijus Masiulis continuing to batter the Liberal Movement (LS), its chances of entering Seimas are continuing to decrease. The Liberals are accompanied by the Labour Party (DP) and the Order and Justice (TT) Party in their decrease in popularity. Meanwhile the Anti-Corruption Coalition of Kristupas Krivickas and Naglis Puteikis is gaining ground shows a recent opinion poll, lrytas.lt informed.

The top three parties continue to remain the same with the Social Democrats (LSDP) hovering around 16% of votes, Lithuanian Peasant and Greens Union (LVŽS) at around 12.6% and Homeland Union-Lithuanian Christian Democrats (TS-LKD) at around 9.2%. To compare, a July poll suggested LSDP would earn 14.2%, LVŽS would earn 12% and the Conservatives 10.8% of the vote.

The biggest shift can be seen among the less popular parties, with the Liberal Movement continuing to lose ground amidst its ongoing scandal. The party has dropped from 5.9% of votes as seen in July to just 2.7% in the most recent poll.
|
“I believe that E. Masiulis’ statement on TV recently had an impact. It looked rather unsuccessful, the scandal had already faded from public memory. Not only did it not convince, but also if we are to believe the version, perhaps it looks even worse: how can someone carry money around in bags?” sociologist and director for the company releasing the poll Vilmorus, Vladas Gaidys said, highlighting the negative influence of Masiulis’, who is the key suspect in a corruption scandal, public statements in the media. Masiulis’ main statement, detailing that he took a loan and not a bribe from MG Baltic Vice-President Raimondas Kurlianskis, was broadcast on September 6, while the opinion poll went from September 2 to the 10th. Law enforcement agencies believe Masiulis took a €106,000 bribe.

Other shifts show the DP dropping from 7% of the vote in July to 5.1% in September, meanwhile the TT decreased from 5.5% to 4.8%. The Anti-Corruption Coalition of Kristupas Krivickas and Naglis Puteikis has been gaining on them, with 4.7% of the electorate likely to vote in their favour. Despite their gains, as a coalition it needs 7% of the vote to enter Seimas. V. Gaidys notes that the Anti-Corruption coalition can be seen as a sort of novelty, thus earning some of the protest vote.

The poll also goes on to show individual politician’s ratings. President Dalia Grybauskaitė continues to remain at the top of the ratings list, despite a decrease from 58.6% in July to 52.9% in September. The Chairman of the LVŽS has risen to second place, gaining 0.2% since July to earn a vote of confidence from 39.4% of the electorate. LSDP leader, PM Algirdas Butkevičius has dropped from 40.2% in July to 37.8% in September. He is followed by Minister of Foreign Affairs Linas Linkevičius (went from 38.1% to 37.5%) and head of DP Valentinas Mazuronis (went from 36.6% to 32.8%).

The opinion poll was performed by the public opinion and market research centre Vilmorus by commission of the Lietuvos Rytas newspaper on September 2-10. 1035 individuals were surveyed.

ELECTIONS 2016: New opinion poll shows reshuffling at the bottom of the parties’ list