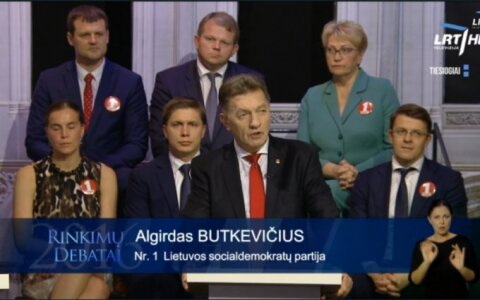 “People first” is the slogan with which the Social Democrats (LSDP) entered power four years ago. Last week, however, the LSDP voted alongside a number of other parties to overrule the President’s veto of the new Labour Code. The question of whether voters will feel deceived rises.

While some voters are concerned by such changes, LSDP Chairman Algirdas Butkevičius seeks to calm voters, claiming that the new Labour Code should make Lithuania more competitive, stating that “I believe that these are necessary laws for Lithuania, to ensure it would be competitive because only in a competitive country can citizens be happy. This is my stance as an economist. A person needs to be free and choose to work where he wants. It is necessary to create conditions where people can compete,” said the PM.

Related articles
ELECTIONS campaign funding – parties' coffers
ELECTIONS: Who will be the next Seimas Speaker?

While it will still take a while for the impact of such decisions to truly surface, the impact of the decision itself can likely already be felt and could have an impact on the Seimas elections which are less than a month away. Vilnius University Institute of International Relations and Political Science docent, political scientist Mažvydas Jastramskis notes that while the impact of such a decision can be marginal, with many other factors buffering the party’s stance on the Labour Code, public discourse could be turned against the party greatly, particularly if the President remains critical of the step.

Meanwhile public relations agency Nova Media PR specialist Arijus Katauskas feels that the decision to vote to overrule the President’s veto could have a large impact, with the LSDP potentially losing voters from their traditional partner – trade unions. He stresses that the unions are well organised and entrenched in various sectors, thus having much potential to impact the upcoming vote. The expert also notes that this could be something the Homeland Union-Lithuanian Christian Democrats (TS-LKD) could use to lash out toward the LSDP with.

In the end Katauskas believes that of all the parties that voted to overrule the Presidential veto, such as the Liberal Movement, Labour Party and others, the LSDP has lost the most. Meanwhile both Jastramskis and Katauskas echo one another, noting that the Lithuanian Peasant and Greens Union standing against the new labour code will likely garner them extra votes.

Even internally within the LSDP there are rumblings that the decision has been a mistake, at least in the short term. Party deputy Chairman Algirdas Sysas admitted to tv3.lt that it feels like some voters turned away from the party due to their party’s stance on the Labour Code.

“A part of the voters definitely left. On Friday I had a forum with food industry workers and I had a very difficult discussion with an audience that would usually be very friendly and supportive of the LSDP and me. It was very hard to show that this isn’t the end of the world and that there are opportunities to continue working and amend the labour code, that it will be done, since after all life is constant change,” Sysas admitted. He noted that it likely would have been better to first commit the amendments recommended by the President to the new code before passing it and that the decision may in part have been motivated by an interest in lashing out against the President, with whom the LSDP has always had a rocky relationship.