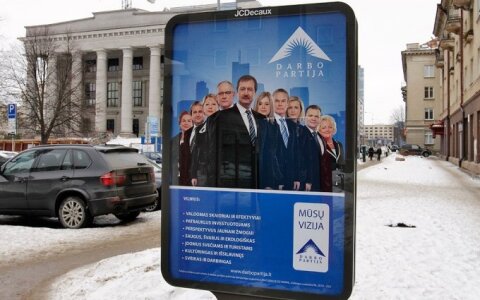 For each election citizens can read a number of lengthy party programmes with a series of promises from candidate parties, often fairly abstract promises to improve everything, with no substantiation as to how it will be done. Many such promises end up being forgotten in the long run. News portal tv3.lt looked through the party programmes of the 2012 election and the tax and business environment envisioned in them. Unfortunately what first springs into view is generalisations.

For example the Labour Party programme claimed that seeking to create new jobs, the party will create conditions for businesses to actively expand into the regions of the country, that it will encourage entrepreneurship and will form a healthy environment for businesses by providing tax incentives for starting small businesses and by applying European best practices. Other parties had a similar approaches, even if with slightly different wording TV3.lt reported.

Vilnius University Institute of International Relations and Political Science Director Ramūnas Vilpišauskas notes that such pledges are typical because they leave much space for interpretation. Politicians can claim that a part of their promises was fulfilled. It is hard to evaluate the success of abstract pledges. The political scientist notes that while some claims simply cannot be substantiated without detailed ministerial level information, there is a definite degree of immorality with politicians sometimes pledging things far beyond their station or using template statements and parties competing in who can promise more without actually committing to anything concrete.

A number of parties such as the Liberal Movement or the Labour Party promised to encourage reinvestment, something along similar lines to the Estonian example where businesses that reinvest their income do not have to pay VAT for it. Such ideas did not come to fruition. Almost all parties pledged some sort of tax benefits, but none materialised over the past 4 years. The President of the Lithuanian Business Confederation Valdas Sutkus jokes that the government prefers to raise taxes instead, noting that promises concerning a zero percent income tax on reinvestment materialise with every election, but always fail to pass due to some sort of issue. Sutkus also adds that the situation is similar with tax benefits for business start-ups, musing that perhaps there is a need to ask for specifics in electoral programmes.

There is a silver lining however. Investor’s Forum Managing Director Rūta Skyrienė stresses that the lack of tax concessions is perhaps for the better because they sometimes distort the market. “Electoral ideas can ruin everything. Sometimes you end up thinking “Thank God they failed to accomplish their political programme.” The phrases sound nice, but the actions taken are in the completely wrong direction. It is fairly difficult to accomplish anything because we lack a clear right and left. Coalitions have to review their partners’ promises and thus some pledges end up not making the cut,” Skyrienė noted.

Among the projects that failed to pass was tax breaks for economically weak regions, VAT exemptions and progressive taxation.

Skyrienė notes that some pledges were fulfilled thanks to the new Labour Code passing. “Some exemptions were made for small businesses. It is contained within the new Labour Code, reduced regulation. For example companies with less than 10 employees will have simplified regulations,” she said, adding that the government actively sought out cooperation with business associations in creating legislation and combatting corruption. The expert also noted that the state tax authority implemented an electronic tax management system which is expected to reduce the bureaucratic paper trail. Valdas Sutkus also adds that to some extent the pledge to reduce the number of institutions regulating businesses was fulfilled with a number of the institutions being merged.

Ramūnas Vilpišauskas points out that this year’s programmes contain far more concrete data, such as pay raises and direct investment, but remains sceptical, stating that “Such specificity may impress the voters, but a different question rises – how much do these things depend on the politicians running for Seimas and how much do they depend on the state of the Lithuanian economy, its growth and the state of neighbouring markets. Politicians cannot directly influence those. For example the average wage cannot be regulated through legislation. For most people it is a matter of negotiation with their employer and such pledges are incomplete and so to say can be misleading.”