ELECTIONS: Kęstutis Daukšys on the crises following the Labour Party 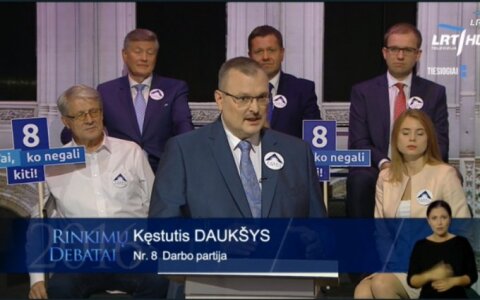 Politicians tend to remind of their colleagues mistakes and failed pledges in the lead up to elections. Labour Party deputy Chairman Kęstutis Daukšys, speaking at the TV3 news studio, endeavoured to speak against the image of his party and fellow party members who have come across as incompetent and incapable of making adequate decisions in many cases as of late.

Daukšys admitted the party is undergoing something of a crisis of leadership with the controversial party founder and patriarch Viktor Uspaskich having retired from politics and its new leader, Valentinas Mazuronis, who ran over from the Order and Justice Party, opting to choose work at the European Parliament instead of Seimas. While Daukšys highlights that Mazuronis is committed to the party and does much work for it, he is forced to admit, that the chairman not committing to the Seimas elections is detrimental to the party and that other members have to step up due to this. Also regarding new members, of which the Labour Party has had a large influx lately, Daukšys has to admit that there has been some friction, particularly noting that some famous names in Lithuanian politics have joined in such as Gediminas Vagnorius and Artūras Paulauskas. That said the deputy Chairman believes that this friction is more akin to competition, which he finds to be healthy, furthermore adding that the new blood has brought some fresh ideas as well.

Regarding his colleagues, who have in recent times seemingly demonstrated incompetence, Daukšys noted that the scandals have been overblown and that despite an initial adaptation period, he believes that they have been successful at adapting to their posts and are particularly competent at the tasks given to them. Much of the problem, he noted, lies with poorly executed public relations, observing that most ministers fail this way at some point and only veterans with several terms under their belts find it easier to avoid gaffes. On his own part, the politician admitted failing to keep adequate tabs on some stock owned by his wife in Bulgaria, but stresses that the property only amounted to €2000 and that he freely admitted his mistake.

To round off the interview, Daukšys expressed some criticism to certain education reforms that have had a number of universities looking at mergers. He noted that this is becoming an issue with higher education revolving around Vilnius and Kaunas, with the regions and smaller cities such as Šiauliai and Klaipėda losing out due to this. Furthermore he took the opportunity to jab at the major parties in the election, the Homeland Union and the Social Democrats, observing that their promises of raised average wages were described as populism, but now major parties have apparently had to admit that the raising of the minimal monthly wage was an important step.

ELECTIONS: Kęstutis Daukšys on the crises following the Labour Party