Forming of Government could depend on parties’ speed on ELECTIONS night 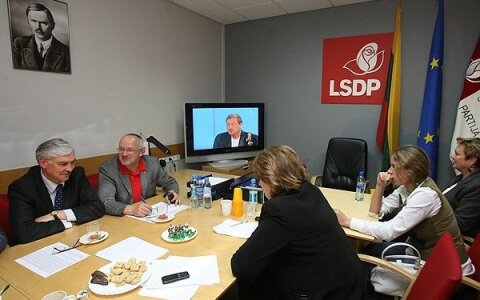 Political calculations have great weight in the composition of a coalition government, however a factor that may be surprisingly important is the speed of making contact with potential partners once the votes start coming in, notes political analyst Jurga Tvaskienė. Political scientist Ramūnas Vilpišauskas also adds that preliminary negotiations could already begin even while votes are still being counted.

The creation of the current coalition government can be traced back to the Labour Party leader Viktor Uspaskich initiating contact with the Social Democrats led by Algirdas Butkevičius and Order and Justice led by Rolandas Paksas soon after the announcement of the voting results. An hour long meeting led to the forming of a work group which would later become the foundation of a coalition. Tvaskienė notes that similar meetings will likely occur next Sunday as well, as the politicians cannot leave citizens waiting. There has to be some sort of announcement by Monday morning.

She points out that the groundwork for coalitions is made ahead of time, with plentiful rumours of potential partnerships between the “Peasants” and both the left and right. The expert highlights that parties outline not who they would work with, but instead who they wouldn’t want to work with. The closer the election, the fewer such combinations remain due to pragmatism kicking in.

Tvaskienė believes that by this point it comes down to whether the coalition will be formed under the Homeland Union – Lithuanian Christian Democrats or the Lithuanian Social Democrat Party. As such, it may simply end up being a question of who initiates negotiations faster.

Institute of International Relations and Political Science head R. Vilpišauskas notes that the variable of speed will be highly dependent on the actual results of the vote, what parties enter, whether they are the ones who were expected to have success in the election based on opinion polls. Vilpišauskas also highlights the importance of the single-mandate electoral districts.

He notes that while initial negotiations will likely begin on the night of the first round, specifics will only begin to emerge after the second round, even into December. Vilpišauskas concludes that realistically we can expect a new cabinet by the beginning of December this time.

Forming of Government could depend on parties’ speed on ELECTIONS night