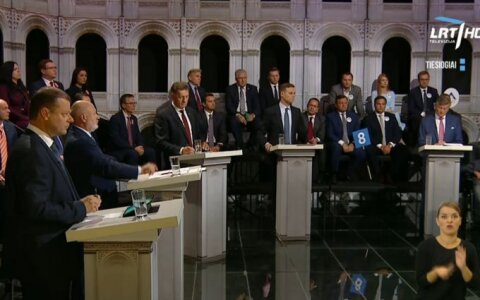 With the Labour Party’s glory days long past, its electoral programme is no longer meant to reflect reality, but to attract voters notes political analyst Rimvydas Valatka. He is echoed by the LRT.lt chief editor, political scientist Vladimiras Laučius who notes that the party will likely pass the 5% barrier, but won’t get further than that. The experts further discussed the circumstances facing the Labour Party and its programme in an LRT Radio show.

Sodra
R. Valatka observes that the Labour Party immediately begins its programme with various pledges. He also adds that unlike many others, it does not move into accusations regarding the past. “For example the Social Democrat’s [electoral programme] second paragraph states that the earlier Conservative and Liberal rule was harmful. The Labour Party has no mention of that, just promises. Many promises: a five year income tax exemption for manufacturing and service companies with up to 10 employees, encouraging export, creating a programme to “create” investment over four years, no longer subtracting income tax from the minimal monthly wage,” summarised Valatka. Other than that there’s also a promise of VAT being reduced to 5% for key food products and amnesty for all those who fail to pay tax on paying 10% of the debt.

A peculiar suggestion that the expert observed is a pledge to create a reserve for the national social security agency Sodra. Valatka quips that this shows a lack of understanding in economics, with the Sodra budget having long been in a vast deficit, nearly reaching its annual budget. He asks, what exactly the party did over the past four years, with a Labour Minister of Social Security and Labour, that the party programme calls for improvements of Sodra functions. The conclusion Valatka comes to is that the party is well past its heyday, now only seeking to make pledges that could attract voters once more.

Fighting the black market in real estate renting and dentistry

Economics expert Gitanas Nausėda finds the Labour Party programme to neither be particularly good or bad, albeit pointing out greater ambitions than other parties. He notes that it is likely that the partial success of raising the minimal monthly wage (MMW) inspired the party to focus on this area. Labour also proposes to index the MMW based on work efficiency. The economist notes that the two foci are difficult to combine, with the party wanting to both raise the MMW and index it based on work efficiency.

On the various exemptions proposed by the party, Nausėda notes that this likely would heavily reduce the budget, while failing to provide noticeable differences for citizens. But for him, the most outlandish suggestion is that of fighting the black market by providing income tax returns opportunities by providing documents proving expenses regarding rent and dentistry expenses. The economist is unsure whether the two sectors are particularly influenced by the black market and muses that likely the Labour Party wants to encourage the sectors somehow, but in the end clarification from the makers of the programme are needed.

Why there’s no criticism of the Conservatives

V. Laučius points out that the party has definite chances of entering Seimas, but will likely not go far beyond the 5% barrier needed to enter. The expert muses that likely the Labour Party is shying away from criticisms on the Conservative and Liberal cabinet of two terms ago due to an intent to join a coalition government formed by the former.

That said with the party programme containing a number of points the Conservatives are unlikely to appreciate and the number of unappealing personas in the party, along the lines of a convicted former party leader and founder, as well as the controversial Minister of Education and Science Audronė Pitrėnienė, it may be hard to appear appealing. In the end Laučius notes that the party will not form the core of the coalition, even if it enters it, thus its pledges cannot be taken overly seriously. The expert observes that the party simply has not been able to replace the charismatic persona of Viktor Uspaskich and thus its golden age has ended.