Most leaders of Seimas election lists back same-sex partnerships 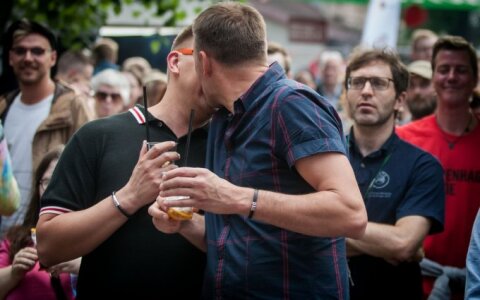 If ordinary members of Lithuania's next parliament back the ideas of their leaders, the country may adopt a historic decision to legalize homosexual relations within the next four years.

With days to go before the first round of Lithuania's parliamentary polls, five out of eight leaders of the most popular political parties' election lists said they in favor of same-sex partnerships.

This marks a turning point in the political elite's attitude toward sexual minority rights: the Liberal Movement was the only major party that supported legalization of gay partnerships in the run up to the 2012 Seimas elections.

Lithuania's current legislation does not recognize partnership as a legal relationship either between same-sex people or between unmarried man and woman.

Proponents of partnership say that unmarried partners are discriminated against as they have no right to inheritance, have no access to information about his or her partner's medical condition and cannot represent one another in court proceedings.

Opponents say that if partnership is legally recognized, this will undermined marriage as an institution and may be the first step toward allowing homosexuals to adopt children.

The outgoing leftist government proposed to legalize registered partnership between man and woman, but a bill allowing it never reached the parliament. Social Democratic Prime Minister Algirdas Butkevičius has spoken out in public against homosexual partnerships.

However, he might have difficulty convincing his fellow conservative lawmakers as some of the party's old-timers have publicly distanced themselves from their chairman's position.

"I have publicly stated my personal position. I support legalization of civil partnership irrespective of the sex of the partners," Landsbergis told BNS.

The Liberal Movement sticks to its position that homosexual partnerships should be legalized.

Eugenijus Gentvilas, who tops the list of the Liberal Movement's candidates for next month's general elections, said that Lithuania, which gained independence from the Soviet Union 26 years ago, "has to follow the world and allow people to make their own decisions, rather than regulating their lives".

Kęstutis Daukšys of the Labour Party, Naglis Puteikis of the Anticorruption Coalition and Siaulius Skvernelis of the Peasant and Green Union also told BNS that they supported same-sex partnerships.

Most leaders of Seimas election lists back same-sex partnerships