ELECTIONS. Frightening pace of emigration – what will be done? 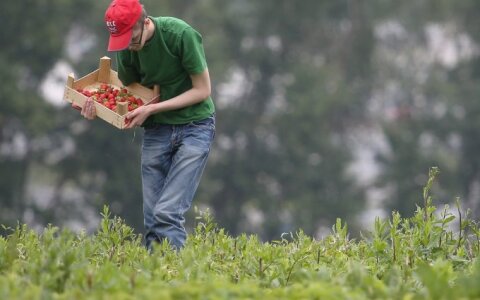 A local Lithuanian community in Peterborough, UK numbers 9000 members. This is more people than live in Šakiai, Pakruojis or Širvintos. The city’s numerous Lithuanian restaurants and Polish stores have been immortalised by images taken by international media. Lithuania is shown to be a case of individuals taking root abroad and taking not just their families with them, but entire villages.

“Emigration is the key topic of this autumn’s election. Everyone is promising pay raises to €1000 or €1100 and a halt to emigration,” observed the docent of the Vilnius University Institute of International Relations and Political Science Kęstutis Girnius.

Since the accession to the EU, Lithuania has lost over 370 thousand inhabitants. The 2011-2014 period saw a continuous decrease of this, but the rates of emigration started rapidly rising again in the past few years, despite economic and wage growth. Meanwhile the links of emigrants to Lithuania are seen as deteriorating, with fewer cash transfers and fewer returnees. 7000 individuals left Lithuania in August, with only 3000 returning. There is no one specific reason highlighted as being the main factor, but experts observe that the trend could be due to dissatisfaction with social inequality, return of mandatory military service or Brexit.

Related articles
ELECTIONS. Parties programmes on education
ELECTIONS. Debate on demography: a victory for the Conservatives

The European Commission forecasts that Lithuania will lose 35% of its working population by 2030 due to emigration and low birth rates, this is the worst figure in the entire EU and it is likely to cause problems with long term economic growth prospects and the stability of the pension system.

Saulius Skvernelis, one of the figureheads of the Lithuanian Peasant and Greens Union (LVŽS) highlights the emotional factor and urges politicians to apologise to the expatriates in an effort to present his party as an alternative to the incumbent coalition forces, stating that “We, all the politicians, have to tell all of those who left that we apologise that through our apathy and incompetence we forced them out of Lithuania.”

“Businesses have to look at those people and have to say that they apologise for their greed which forced those people out of Lithuania. Law enforcement has to say that people lost the feeling of justice and left because there was a failure in unbiased investigation,” he continued.

The Social Democrat leader, PM Algirdas Butkevičius praised rising economic measures and insisted that the new Labour Code would encourage investment. The leader of the Conservatives Gabrielius Landsbergis has accused the coalition government of inactivity and assures his party are prepared to generate well paid jobs in the regions by attracting investment from Scandinavia and Germany. Landsbergis’ party also pledges to pay great attention to vocational education and higher education reform in order to prepare the specialists needed by the country.

With the young average age of emigrants, most politicians focus on support to young families, ranging from tax exemptions to one time disbursements.

Below are the key pledges of parties expected to pass the 5% vote boundary needed to enter Seimas:

Social Democrats stress that their term has seen a rise of average wages from €615 to €748 and claim that this will rise to €1100 by 2020. The party pledges to continue increasing the minimal monthly wage and to support young people in obtaining their first home and founding their first business. The PM insists that the new Labour Code will attract investment and the creation of work places.

The Lithuanian Peasant and Greens Union promises to change the government’s attitude to the people and to seek harmony in various spheres. The “Peasants” stress that emigration is not caused by economic factors, but a feeling of disappointment. The party intends to pay particular attention to family policy, communities, ecology and encouraging values in education. It is highlighted that the added value the country obtains should reach its citizens, who live in the more remote regions.

The Homeland Union – Lithuanian Christian Democrats promise to focus their attention on regional centres and special investment and export programmes. They pledge to establish an improved vocational education system, to improve the quality of higher education by leaving only three high quality universities and to break the Labour Exchange’s monopoly on employment.

The Labour Party stresses its role in raising the minimum wage and states that it will encourage creating jobs by ensuring that invested income is not taxed and by channelling EU structural aid. It is promised that young people will be exempt from income tax for the first two years, that the building of social housing will be sped up and that every eighteen year old will be given a €2000 grant.

The Order and Justice Party promisses those returning from emigration a one time €5000 grant and a plot to build a house. Every child born is to be followed by a €3000 grant to the family, with €100 disbursements being provided to the child every month. Baby food, their hygiene products, children’s clothing and footwear is to have a 0% VAT rate.

The Liberal Movement promises tax and regulation reductions in order to attract jobs to Lithuania, they also pledge to reform the Labour Exchange. The tax free income size is to equal the minimum wage. Liberals stress that by helping people, the government must not interfere with their personal lives. The policy of prohibitions has to be left behind. The party supports double citizenship and electronic voting.

The Electoral Action of Poles in Lithuania – Christian Families’ Union promises to focus its attention on a family policy grounded in Christian values. The party programme pledges a €120 disbursement every month for each child and a family card for large families. Extra funds are to be gathered by taxing banks and supermarket chains.

The Anti-Corruption Coalition of N. Puteikis and K. Krivickas programme writes that emigration and population decreases are to be stopped through the “saved billions” that will appear when political corruption is halted. The coalition claims that the funding will allow for wage raises and improved conditions for young families.

ELECTIONS. Frightening pace of emigration – what will be done?