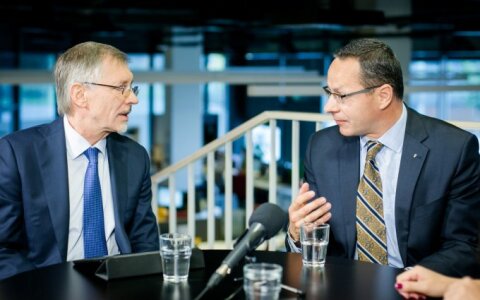 Both politicians praised the work of incumbent Minister of Foreign Affairs Linas Linkevičius, but Pavilionis observed that there was a certain disconnect between the minister and the rest of the cabinet, as well as Seimas. He quipped that perhaps this is due to a total lack of interest in foreign policy or an inability to communicate with foreign partners due to lacking language skills among many members of Seimas and the ministerial cabinet. Kirkilas found that the blame could not be solely placed at the feet of the current coalition, pointing out that part of the blame should be directed toward the Conservative cabinet of the 2008-2012 term, given the massive financial cuts done then.

G. Kirkilas observed a successful partnership between the Minister of Foreign Affairs and the President, but expressed dissatisfaction in the President’s lack of cooperation with the cabinet, highlighting how it has been months since Dalia Grybauskaitė directly interacted with PM Butkevičius. To this Pavilionis retorted that due to the lacking skills of many in the cabinet, PM included, there is not really much use the President can get out of them in international circles