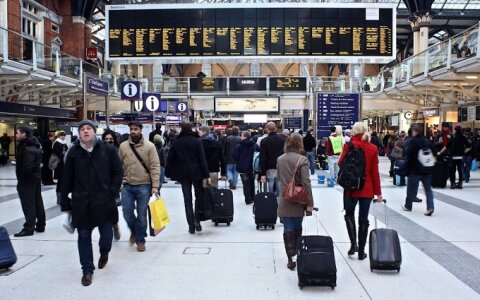 Mass emigration from Lithuania has become a key topic in this year's general elections, with most political parties vowing to create more well-paid jobs to lure people back home, but laying emphasis on different aspects of achieving this goal.

"Emigration is a key topic during these elections. All (parties) promise to raise salaries to 1,000 or 1,100 euros and stop the emigration," Kęstutis Girnius, associate professor at the Vilnius University's International Relations and Political Science Institute, told BNS.

Lithuania has lost some 370,000 people due to emigration since it joined the EU in 2004. After declining steadily between 2011 and 2014, the rate of emigration returned to the upward path in 2015 and stays on it this year, despite general economic growth and rising wages.

Related articles
ELECTIONS. Frightening pace of emigration – what will be done?
ELECTIONS. Debate on demography: a victory for the Conservatives

What heightens concern is a decline in the number of returnees and the amount of remittances to Lithuania, which may signal a weakening of expatriates' links with their homeland. In August, over 7,000 people emigrated from Lithuania and less than 3,000 immigrated.

Experts differ in their opinions on the causes of the trends of the past two years, but they say that some of the reasons for emigration may include discontent over social inequality, the reintroduction of military conscription and Britain's decision to leave the EU.

Emigration may bring short-term benefits to the economy in the form of emigrants' remittances and lower unemployment. However, most economists agree that the current scale of emigration poses risks as a labor shortage begins to emerge and long-term growth and pension system sustainability is threatened.

The European Commission forecasts that Lithuania will lose 35 percent of its working age population by 2030 due to the emigration and low birth rate -- more than any other EU country.

Siaulius Skvernelis, a former interior minister who tops the Lithuanian Peasant and Green Union's list for this month's elections, emphasizes the emotional well-being of society and calls on politicians to apologize to emigrants, trying to position the Peasants and Greens as an alternative to the parties that have ruled the country until now.

"We, all politicians, must tell these people who have left, 'Forgive us for our indifference and our inability to run the country. We have forced you out of Lithuania'," Skvernelis, who is running for the Seimas for the first time, said in a LRT election debate.

"Businesses have to look at these people and say, "We apologize. It is our greed that has made you leave Lithuania'. The law-enforcement must say, 'Because of our inability to investigate in a principled way, people have lost the sense of justice and left'," he said.

Prime Minister Algirdas Butkevičius, who is running for another term in the Seimas elections, is proud of minimum wage hikes and growth in average earnings. The Social Democrats promise that the wage growth trend will continue and that the new Labor Code will encourage investment.

"Studies show that the largest emigration is due to economic social differences between countries. I am glad that our government has managed to raise the minimum monthly wage five times and the average wage has finally reached the pre-crisis level," he said.

Butkevičius says that the labor relations reform, approved by the outgoing Seimas at his initiative, may create 85,000 jobs in several years' time.

Gabrielius Landsbergis, leader of the conservative Homeland Union–Lithuanian Christian Democrats, accuses the leftist government of inaction and says that he has a plan of how to create well-paid jobs in Lithuania's regions by attracting investors from Scandinavia and Germany. He says that he will personally go to factories to invite businesses to move their operations to Lithuania. The conservatives promise to pay great attention to reforming vocational training and higher education to meet the labor market needs.

"First, jobs in regions and help to investors (to encourage them) to come to Alytus, Panevėžys, Marijampolė so that people from Peterborough could come to Lithuania to work," Landsbergis said in a debate.

"The second step is toward an improving education situation. Emigrant families say that they cannot return to Lithuania because of the different levels at schools. Third, we have to lure back professionals from London and Dublin. We have to expand the programs Kurk Lietuvai (Create for Lithuania) and Dirbk Lietuvai (Work for Lithuania)," he said.

Given that more than a half of Lithuanian emigrants are young people, most politicians promise support for young families, ranging from tax breaks to one-off aid payments.

Here is a look at key elections promises by political parties that opinion polls show have chances of passing the necessary 5-percent threshold to win seats in multi-mandate constituencies.

The Social Democratic Party underlines that the average wage increased from 615 euros to 748 euros during its years in government and promises that it will reach 1,100 euros in 2020. The party vows to continue increasing the minimum monthly wage and to help young people to purchase their first homes and start businesses. The prime minister says that the new Labour Code will encourage investment and new job creation.

The Lithuanian Peasant and Green Union says that it will change the government's attitude toward people, stressing that the emigration is being driven not only by the economic situation, but also by a sense of disappointment. The party vows to place an emphasis on family policies and on promoting the sense of community, ecology and values in education. It stresses that economic value added should reach people in all regions of the country.

The Homeland Union–Lithuanian Christian Democrats promise to focus on regional centers and on special investment attraction and export promotion programs. The conservatives vow to create a better vocational training system, to improve the quality of higher education by leaving three quality universities, and to strip the Labour Exchange of its monopoly in the field of employment.

The Labour Party underscores its role in minimum wage hikes and says that it will encourage job creation by not taxing reinvested profits and by providing support from EU structural funds. The party promises to exempt young people from paying personal income taxes for the first two years, to promote the construction of social housing and to grant 2,000 euros to every Lithuanian citizen on their 18th birthday.

The Order and Justice Party promises to provide one-off payments of 5,000 euros and plots of land for house building to returnees, and to grant families 3,000 euros on the birth of each child and a monthly allowance of 100 euros for each child. The party says that it will seek a zero VAT rate for baby food and hygiene products and children's clothing and shoes.

The Liberal Movement vows to cut taxes and red tape to make Lithuania an attractive country for new jobs and to revamp the Labour Exchange. The party proposes to increase the tax-exempt income level to the minimum wage level. The Liberals believe that in helping people, the government should not interfere in their private lives and should abandon the policy of bans. The party supports dual citizenship and electronic voting.

The Electoral Action of Poles in Lithuania–Christian Families Alliance promises to focus on a family policy based on Christian values. The party promises to pay families 120 euros for each child monthly. It plans to tax banks and retail chains in order to raise additional budget revenue.

The Anticorruption Coalition of Kristupas Krivickas and Naglis Puteikis promise in their program to use "billions" of euros they expect to raise by putting a stop to political corruption for curbing emigration and checking the decline of population. The coalition says that the extra money will help raise wages and create better conditions for young families.