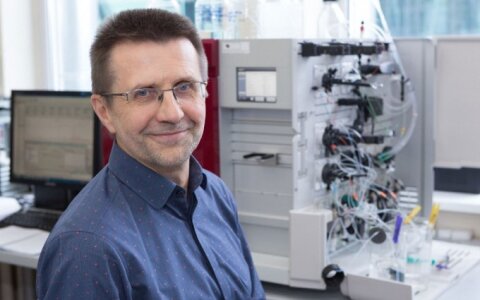 Virginijus Šikšnys of the Institute of Biotechnology at Vilnius University (VU) has a realistic chance of winning a Nobel Prize in chemistry on Wednesday, VU Rector Artūras Žukauskas said on Tuesday.

Siksnys has discovered how the DNA of organisms can be edited much faster by using a single protein. This opens up possibilities for developing genetically modified organisms and treating genetic diseases.

Žukauskas predicts that a Nobel Prize in chemistry will sooner or later be awarded for this discovery.

"A Nobel Prize will be given for this discovery either this year or next year. I am 90 percent certain about that. If a prize is awarded for this discovery, then I'd put Šikšnys' chances at more than 50 percent, and his chances are increasing as he is getting increasing recognition," he told BNS

Professor Šikšnys is researching a system that allows accurately cutting DNA sequences within about two weeks.

In Žukauskas’ words, this is similar to text cutting.

"Let's imagine that our DNA is a text and that all words in the text are of four letters. The discovery allows us to program the protein to come and cut the text where we need it to be cut," the reactor said.

Although Šikšnys did not discover the Cas9 protein, he noticed that it could be used to edit DNA very quickly.