ELECTIONS. Parties already negotiating but remain mute about it 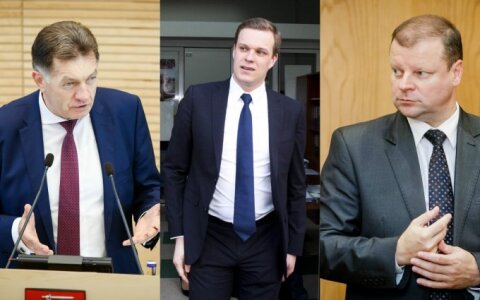 LRT.lt sources suggest that Peasant and Greens (LVŽS) negotiations with the Social Democrats (LSDP) are led by former Minister of the Interior Saulius Skvernelis, while the negotiations with the Conservatives (TS-LKD) are led by the party leader Ramūnas Karbauskis. Meanwhile the LSDP and TS-LKD continue to struggle to enter negotiations. It is completely possible this won’t change even after the elections. Thus it is fair to say that most likely there will be no “rainbow” adorning the political skies of Lithuania after the elections.

A rendezvous with the former minister on the night of elections?

S. Skvernelis has not denied that he has been having frequent meetings with the LSDP leader, PM Algirdas Butkevičius, but denied any potential negotiations having been started. The politician was particularly mute as to the content of such meets, stating that “Perhaps we have things to talk about. But that is our business.”

Related articles
Parties' ratings and ELECTIONS results: now and then, what to expect?
ELECTIONS: Peasant and Greens Union in brief

Based on information available to LRT.lt Skvernelis has mentioned that he intends to visit the LSDP electoral headquarters on the night of elections.

The Chairman of the LVŽS looks to be intent on denying any negotiations by him or other party members regarding potential coalitions are ongoing, right up to the end.

“I interact with the Conservatives no more frequently than with the Social Democrats. Today I met A. Butkevičius. What does this mean? It means nothing. Please understand – preliminary talks or negotiations mean nothing in this election because even after the first round no-one will negotiate with anyone. After confirming the results we will all most likely head home. It is sad that political analysts assure that these election will be no different from prior ones,” stated Karbauskis.

When asked how this year’s election to Seimas will differ compared to prior ones, the politician explained that he has a different vision for the future government of the country, compared to both the TS-LKD and LSDP.

“If they manage to come to terms on the night of the first round of elections, the events of the 2012 election will repeat. We will negotiate with no-one because the elections will have yet to conclude. After all it will be unclear who will have how many mandates after the second round. On the other hand, our proposal to compose the cabinet out of professionals is principally unacceptable to both the Social Democrats and the Conservatives,” stressed Karbauskis.

He expressed confidence in his party winning the election and if the two major parties agree to form a cabinet of experts, they will be able to join the coalition government. The politician also stated that their party would even be willing to forgo seeking the post of PM for S. Skvernelis in return for forming an expert cabinet.

LSDP negotiators currently have no work to do

LSDP electoral headquarter manager Algirdas Sysas stated that he was unaware of the content of the meetings between Butkevičius and Skvernelis as he has not participated in them. Sysas confirmed he is part of the Social Democrat group of negotiators which includes Seimas Deputy Speaker Gediminas Kirkilas and Minister of Justice Juozas Bernatonis.

“We are not speaking with those who could earn 5% of the vote in the elections. We could negotiate with only those who earn significantly more votes. But the “Peasants” have said they will not negotiate yet, so why should we go to them? Meanwhile we ourselves are unwilling to negotiate with the Conservatives. For now the situation is as such,” said Sysas.

Last week G. Kirkilas told LRT.lt that he plans to meet with the “Peasants”, but the meeting either did not occur or someone among the LSDP is negotiating, but in secret.

Negotiations obstructed by internal conflict among the Conservatives

The TS-LKD head of electoral headquarters Dainius Kreivys denied there being any current negotiations with potential partners for a coalition. Supposedly one should count chickens after they hatch.

Former party chairman Andrius Kubilius was less categorical, stating that “I am unaware of anynegotiations with the “Peasants”, just as with anyone else, but one or another sort of discussion is always happening somewhere.” Kubilius stressed that he believes the most realistic time for negotiations will be after the second round of elections, with potential consultations beginning after the first round.

Source tell that party veterans, which includes Kubilius, would likely not be against a so-called 2K deal with the Social Democrats, akin to the one made with G. Kirkilas during his term as PM in 2006-2008, however such a decision is strongly opposed by the young party leader Gabrielius Landsbergis and his supporters.

The head of the Liberal Movement fraction Eugenijus Gentvilas revealed that he plans to meet with G. Landsbergis today to negotiate potential discussions on the night of the elections.

“But nothing more than that because we have not been granted the authority to actually negotiate by the party. On Monday we will have a management meeting, meanwhile we are preparing negotiation guidelines which we will use in our discussions on the night of the elections,” said E. Gentvilas. He did not detail what sort of guidelines those would be, but noted that one of them is whether future ministers will assign deputy ministers from representatives of the coalition or their own party.

“A. Butkevičius’ cabinet ministers chose deputy ministers from coalition representatives, while A. Kubilius’ cabinet prior to that had free rein to choose,” explained Gentvilas.

Many are predicting that the Liberals may struggle to pass the 5% vote barrier, Gentvilas has time and again assured that everything will be fine despite the earth-shaking scandal the party experienced and that the party will earn at least 5% of the vote.

When speaking of the categorical stance on ministerial assignations that R. Karbauskis insists on, E. Gentvilas stated that “The cabinet will be made by the coalition and if the “Peasants” are in it, then they can propose their experts, but they have no right to impose their opinion on other parties.” Overall Gentvilas mused that R. Karbauskis’ demands toward coalition party programmes appear to suggest that perhaps the “Peasants” are actually unwilling to participate in the coalition.

“We’ll see. Perhaps the “Peasants” only want to enter Seimas and sit in the opposition? Perhaps they will understand that the current electoral roll is comprised of circumstantial individuals who quickly gathered up in summer, while the programme is disposable and occasional? On one hand R. Karbauskis is sending a message that he does not trust his party members, but only experts. On the other hand perhaps a bench of substitutes would be better. Well, it is a convenient position,” mused Gentvilas.

For some time analysts and politicians have observed divisions regarding certain questions among the “Peasant’s” ranks. Apparently a number of party veterans are dissatisfied with R. Karbauskis’ initiative to bring in a group of so-called nonpartisan experts, who have begun to dictate very different views.

“Don’t count on it,” S. Skvernelis quipped, when asked about potential friction, or even cracks appearing among the party ranks.

There have been rumours of the human rights expert Dovilė Šakalienė, who joined the LVŽS team in spring, having received significant critique from party veterans due to her liberal stance on homosexual marriage and legislative projects which touch upon human rights, children’s and social security. When talking to LRT.lt she did not deny that there have been clashing opinions between her and some “Peasant” veterans.

“No-one is trying to hide it. On the other hand, many old parties manage to conceal what is happening internally, attempting to create an image of unity for voters. That isn’t exactly the case though. After all every party has differences in opinion and competence among its members. Unfortunately power games are going on. The “Peasants” are the most open. Yes, we’ve had differences of opinion on the legalisation of gay partnership. The party chairman and veterans against, while I was for it. But you have to understand that opinions will never match 100%, but if they match 80% we can work together,” D. Šakalienė pointed out.

ELECTIONS. Parties already negotiating but remain mute about it