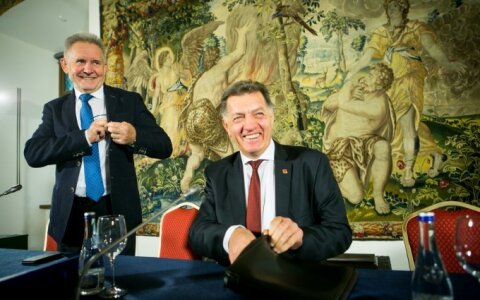 Midnight on October 9, the Social Democrats (LSDP) were confident that they will be among the parties that will form the coalition government. With the results starting to arrive from the multi-mandate electoral districts, however, they had to admit defeat.

The first to speak on it was party Deputy Chairman Gediminas Kirkilas. He was later echoed by the head of the party electoral headquarters Algirdas Sysas: “Clearly, we lost.” He spoke to LRT.lt and detailed what he thought lost the vote for the LSDP.

- What made your party end up only in third place after the first round of elections, which most likely means a loss?

This was caused both by our party’s mistakes and the voter’s attitudes. Furthermore all of those working against our parties contributed. We can start with President Dalia Grybauskaitė and end at our opponents, who used particularly unbecoming means to fight us.
- What were your party’s mistakes?

First of all, the small scandals – Vijūnėlė manor, the noise over PM Algirdas Butkevičius’ son in law, the overblown so-called “golden spoon” scandal. The voters were constantly reminded of these and had an impact on the vote.

- Your party has a large amount of experience. Why were you unable to prevent these scandals and make sure they do not escalate as they did?

We endeavoured to keep calm and avoid harsh rhetoric. But in my opinion we should have had a stronger response at times and perhaps used the same methods of campaigning our opponents employed.

The party lacked a unified position on one scandal or another.

- Does this mean there are several factions in the party?

That’s not the case. In each situation we had discussions and came to consensual agreement. After the elections end we will need to analyse them. Mistakes are to be learned from.

- Do you, as the head of the campaign headquarters, intend to take responsibility for this loss?

Of course I do. Perhaps I was too democratic. I hold the belief that my colleagues must understand themselves when and what conclusions to make about their actions and decisions.

- So your party will have to work in the opposition?

It isn’t clear yet. Who knows who the “Peasants” will decide to make a coalition with. Perhaps they will concede to the President’s plans or perhaps they will make a choice independently?
Either way we need to wait for the final results first. Today, however, it is already clear that our party is not a favourite in this election. We can only adhere to something.

- Most likely you won’t be expecting any negotiators at your headquarters?

Probably not. We won’t go anywhere ourselves either. But this isn’t the end of the world.