Vilpišauskas. A look at the leading parties‘ EU policies 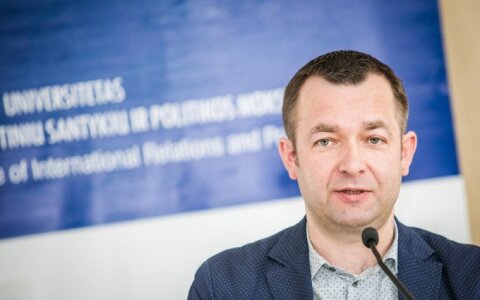 Public surveys shows (the text in Lithuanian was published on October 3) that there are three parties that have the biggest chance to form the leading coalition: the Social Democratic Party of Lithuania (LSDP), the Lithuanian Peasant and Greens Union (LVŽS) and the conservative Homeland Union – Lithuanian Christian Democrats (TS-LKD). The outlook of these parties on the politics of Europe will be evaluated.

To start things off, a couple of general thoughts. Let‘s take into account the other parties that might get the opportunity to form a fraction in Seimas. The Labour Party has a generic “make better and improve” attitude towards European politics, Order and Justice promises to resist the federalisation of EU and the Liberal Movement underlines openness to the EU, a single market, free trade and other similar positions that correspond to their ideology. Altogether, all of these parties support Lithuania’s membership in the EU and the priorities and views on European policies set in 2004. They include support for the neighbouring countries of Eastern Europe and active cooperation with countries within the EU. The similarities in opinions shouldn’t come as a surprise, as it represents both the voter’s positions and the country’s place in the EU.

Related articles
ELECTIONS. Social Democrats reflect on their loss
Forming of Government could depend on parties’ speed on ELECTIONS night

Now, coming back to the three most popular parties. The Social Democrats have the shortest introduction of their position regarding Europe. In the last four years, the minister responsible for foreign affairs represented this very party. So it’s normal that the programme talks about policies that are currently being implemented. Mainly, support for Eastern European countries, solidarity within the EU, development of EU policy on energy, regional cooperation with Poland, the Baltic and Western countries.

Consistency, activeness and continuity is also a part of the Peasant and Greens Union party European policies. However, the party is in favour of strengthening individual national roles and is against the “forced nationalisation of the EU”. No concrete examples of natonalisation are given, though. There’s focus on agriculture, something that is commonplace for this party. The party is against discrimination of Lithuanian farmers in the EU through lower direct payments. Calculations are given regarding how much funding the EU budget, and particularly Lithuania, could lose because of Brexit. Good relations with neighbouring countries are touched upon, and the lack of competence of the current government is mentioned. They say that the current government “is unable to talk to the Baltic countries regarding strategic infrastructural and energetics questions”, but no examples are given. The party offers a “renewal” of diplomatic relations with Poland and Germany. Just like the other parties, LVŽS supports reforms in Ukraine, Georgia and Moldova and supports the idea of them becoming closer with the EU and NATO. When it comes to Belarus, the party notes the questions of the Belarusian Nuclear Power Plant and human rights issues. The party agitates to find a common ground between the Visegrad Group countries and the countries of Scandinavia, though the means to find this common ground aren’t documented.

The Homeland Union presents the most detailed plan regarding its EU policies. Even though the party is happy about the “European and Atlantic directions” that the country maintained throughout the last term of office, it criticises the policies of the current government. The opinions of Former Speaker of Seimas Vidas Gedvilas and European Commissioner Vytenis Andriukaitis regarding Russia are mentioned. These examples are strange, as the latter is a part of the Labour Party, not LSDP. Additionally, members of the European Commission are formally independent from national governments. TS-LKD says that the current government has been going with the tide and that their actions didn’t coincide with national priorities, that they avoided “actual political discussions and new ideas”. A qualitative breakthrough is promised as new ideas of the conservatives are implemented.

What are these high quality and fresh ideas that the Homeland Union promises? A rapid integration of Lithuanian infrastructure into the EU, integration of other Eastern European countries and of Ukraine, first and foremost, persuasion of Western Europe about the long-term dangers of Putin, European solidarity and the strengthening of a “working” regional format between Western Europe, the Baltic countries, and the Polish region. The partnership with the US is accentuated – something that the other parties also touch upon. The attention of the US towards Lithuanian and the nearby regional security is, undoubtedly, one of the most important security questions and it is commendable that a united stance can be seen between the parties. It is crucial that this stance is backed up by Lithuania sticking to its commitments and spends appropriate funding on security.

Coming back to the conservative party’s European political policies, it is evident that new and high-quality ideas are hard to find. All of the priorities mentioned can be considered traditional and commonplace to Lithuania’s foreign policies. The statements of the party can be likened to attempts at breaching an open door. Additionally, we could look back at the foreign policies of the Conservatives while they ruled in the 2008-2012 period. It was their minister that tried to restart the relationship of Lithuania with Russia and Belarus and tried to make matters better when it comes to partnership with Poland. The party should reflect on their own experiences before criticising others.

It would also be fair to admit that the practical implementation of European policies depends not only on coordination between Lithuanian institutions, but also the way that other countries perceive Lithuania when it comes to foreign affairs. The ability of Lithuania to affect the decisions of the EU and other European countries can be seen from the evolution of thought of the Lithuanian President Dalia Grybauskaitė. At the start she advocated for a closer bond with the bigger Western European countries. Now, she is considered as one of the biggest supporters of Eastern European partnerships and is vocal about their needs to the EU. Since the President plays the largest role when it comes to foreign policies, she should also be mentioned and considered as a factor.

So, as we compare the parties’ stances on European policies, we should note that the biggest steps forward that the last and current governments had made were when there was a common agreement between the ruling position and the opposition and continuity was taken into account. Electoral competition is healthy as it creates opportunities for new ideas and the ruling parties can rethink their positions. A large part of questions regarding European policies end up breaking the boundaries of foreign and national interests and becoming subjects of ideological debates. The need to attract the attention of voters makes politicians use techniques of selective communication. Conservatives aren’t the only ones guilty of this, as the Social Democratic Party used the term “disastrous to the country” when talking about the previous government run by the conservatives and liberals.

In conclusion, it should be noted that the aforementioned parties, and LSDP in particular, lack a larger focus on the problems that Lithuania and other the other EU countries are facing. Considering the fact that Lithuania shares a common market, currency and is within the same financial zone, what are their opinions on the Eurozone crisis and what would it take to prevent something like this from happening in the future? What do they propose to solve the refugee and migrant crises, how would they practically implement their solidarity within the EU with countries like Germany? How would they attract attention of the EU and NATO in order to solve problems relevant to Lithuania? What position would they take regarding the question of the United Kingdom, seeing as the EU countries will not want to pander to the UK, while also considering that limiting the relationship of those two regions wouldn’t be beneficial? How would they try to make the countries of Northern Europe and Visegrad speak in one voice, when the politicians of those countries have different opinions?

Even TS-LKD, who put in the most emphasis on these questions, doesn’t have a conclusive stance. The cause might be because of differing opinions between party members. An even bigger divide can be found within the Peasant and Green party. This can be applied when discussing their political campaigns in general. On one hand, this makes it harder to figure out what decisions the parties will make. On the other hand, it increases the number of possible coalitions.

Vilpišauskas. A look at the leading parties‘ EU policies