ELECTIONS. First round of the Seimas elections. Analysis. 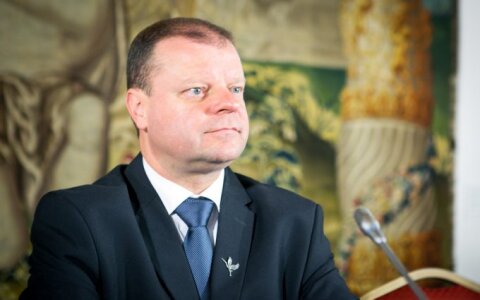 A representative of the statutory class at the top of the political pyramid is an exceptionally bad thing, thus seeing Saulius Skvernelis in the Prime Minister‘s chair would be a great mistake. Thus observes Vytautas Magnus University (VDU) docent, political scientist Bernaras Ivanovas in an interview with LRT Radio. The expert notes that there is still no true stabilisation in the Lithuanian political system because despite the party being founded long ago, the current Lithuanian Peasant and Greens Union (LVŽS) has had a total makeover and can be seen as a new party.

The LVŽS is perhaps the greatest novelty of this election, but attitudes are important as well, Vilnius University Institute of International Relations and Political Science professor Ainė Ramonaitė told LRT radio. “If we look at the LVŽS as a new party, then it is a very big new entity. If we look at it as an old party, this is the first election since 2000 when among the parties entering Seimas, none are new parties. This is something of a sign of stabilisation,” noted A. Ramonaitė.

VDU Associated Prof Bernaras Ivanovas was not overly surprised by the outcome of the election. For example after the “drowning” of the Liberal Movement, many predicted the LVŽS would rise up. The results attained by the Homeland Union – Lithuanian Christian Democrats (TS-LKD) are no surprise either. “I think that if not for the story with Masiulis, second place, if not first, would have gone to the Liberal Movement,” Ivanovas noted.

The Social Democrats (LSDP) experienced a large decline, which the expert believes to have been a surprise for the party. Meanwhile speaking of Saulius Skvernelis’ performance during this campaign, B. Ivanovas believes it could be said that Ramūnas Karbauskis’ party [LVŽS] had a complete makeover, one that makes it into a completely new party, meaning that there is no stabilisation in sight after all.

“Same as it has been since the time of the New Union, our voter still believes in messiahs. Last time it was a political entity from Garliava, earlier – many others. Now it is R. Karbauskis and his party. Of course the party is more systematic, more capable and willing to adequately cooperate with partners. That said the general trends have change very little,” observes B. Ivanovas.

A. Ramonaitė notes that a decrease in votes for an incumbent coalition government party is natural in elections “Those 15% isn’t that much, less than in the previous election. But the performance in the single-mandate districts is simply disastrous. To compare, in the 2012 election the Social Democrats were dominant in 19 single-mandate districts after the first round, this year the number is down to 10. The number has practically halved.”

The professor believes that this is a sign that the party itself (its structure and internal moods in the party) is in trouble because the LSDP has long had an advantage over other parties, for example the Labour Party. “Now this trend has changed and it appears that a part of the LSDP electorate has migrated to the LVŽS, it is as if an escape from a sinking ship,” noted Ramonaitė.

She also points out that while the withdrawal of Ričardas Malinauskas and his entire section from the party had little influence on matters at the national scale, the fact that the Lazdijai and Druskininkai district is dominated by none other than someone from R. Malinauskas’ entourage, just now under a LVŽS flag shows that at least one district is lost to the LSDP now.

Everyone mused on what the fate of the Liberal Movement will be, having earned 9% of the vote. B. Ivanovas believes that we are seeing the main trends, but with a second round looming, many things will still come into their places. The expert observes that a part of those voting for liberal ideas does not trust state institutions “It is odd because typically the liberal voter believes in the value of institutions and similar things. Now we see that all those escapades, STT [Special Investigation Service] and others did not take root and speak of mistrust toward institutions.”

Ivanovas finds the Liberal’s results to be phenomenal, given the pressure the party experience and near incarceration of the now former party chairman. “In terms of our political system, it is a symptom of a disease,” the expert points out.

A. Ramonaitė reminds that the Liberal Movement failed to earn broad support in 2012, stating that “We can speak of votes lost from the once massively inflated Liberal ratings. Part of those voters moved into the TS-LKD camp, but a part, as we see, remained.”

Other parties – surprises and effort

B. Ivanovas notes that the Conservatives’ efforts helped regain leadership. “First of all they defeated their direct opponents in every way possible. Not the Social Democrats, but the Liberal Movement, which had usurped that leadership and would have successfully kept increasing the gap. The Conservative party experienced a period of panic, but managed to pull together and things are now back to usual now,” he explains.

According to A. Ramonaitė, the Labour Party’s failure to pass the 5% vote barrier was a surprise for both the party and for analysts. “After all, the party which declares it has 25,000 members would appear to be the largest. If the spouses and friends of those members voted, they would have earned more than they did now. This shows a significant decline for the party; the entire mechanism that supported it has collapsed,” she observed.

The professor states that having lost its main leader, the whole structure of the party has collapsed. “Since the party was clearly seen as a part of the coalition government, it had to face the brunt of the blame for the failures of the coalition,” said A. Ramonaitė.

Preliminary data suggests that the Order and Justice party managed to take 5% of the vote. B. Ivanovas assures that the party managed to keep its head held high in the current political circumstances thanks to old rhetoric and image. Meanwhile, he notes, their close colleagues in Labour have been completely dethroned, with even their chairman not entering the elections.
The Order and Justice Party tried to fight until the end and stuck to confident rhetoric and statements, which helped create a platform to gather its current percentages. The next election, however, will likely be less successful for Order and Justice believes B. Ivanovas.

A. Ramonaitė points out that it is clear that the Anti-Corruption Coalition of N. Puteikis and K. Krivickas expected more. “They predicted a far greater number of votes and overestimated their capacities. Comparing with N. Puteikis’ performance in the presidential elections, support has dwindled. On the other hand this result is hardly surprising, polls suggested the party would earn around 5% of the vote, they got 6%,” explains the professor, also adding that the choice of forming a coalition, particularly with unpopular entities such as the Lithuanian Pensioners Party, lost the vote because it was clear that this way they would not exceed the required number of votes.

Meanwhile regarding the Way of Courage, B. Ivanovas believes that a part of this party’s electorate moved toward N. Puteikis and K. Krivickas’ coalition, while others were influenced by S. Skvernelis’ entry into the political arena. “It is not surprising at all. This party fractured right on entering Seimas. They were completely ambiguous, had no specific position and the chairwoman vanished. I would say that this half percentage point is perfectly logical,” B. Ivanovas explains what is essentially the end of the Way of Courage party.

The coalition government to become clear after the second round

A. Ramonaitė still has room for doubt, noting that the situation on the coalition government will be clearer after the second round. “But we can see that the “Peasants” and the Conservatives could make a coalition on their own, they would have enough votes. These parties could have around 80 mandates,” she noted.

Meanwhile B. Ivanovas is concerned over the possibility of S. Skvernelis becoming the PM. “A member of the statutory class at the top of the political pyramid is a very bad thing. I am very sceptically inclined here. Everything will be clearer after the second round. If there are no arrests or such, the trends may remain the same.”

Ivanovas believes that most likely S. Skvernelis and R. Karbauskis will be dominant; who they work with will depend on what one or another side offers. “It is naïve to believe that public interest will come out on top. It is not the public interest, but financial interests and ministerial assignations based on points that wins. I do not believe this has disappeared, as pointed out by the Conservative chairman. The most important guiding star for politicians is European funding. Those who manage to come to terms on this first will govern,” assures B. Ivanovas.

ELECTIONS. First round of the Seimas elections. Analysis.