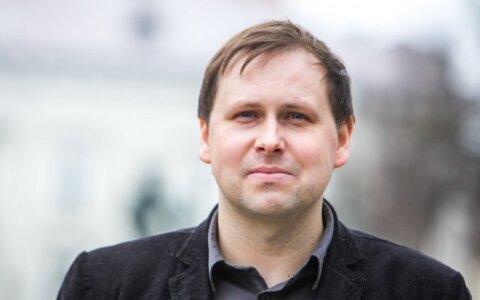 The elections have ended and we will continue to analyse the results for the next few days. Much has been said in other formats (most likely more will be), but with this entry I would like to summarise the first round of elections in the format of an awards ceremony.

As the Scottish monarchical Punk-Rock band Queen sang “We are the champions, my friends”. There are several champions in the first round, the award goes to two parties, the TS-LKD (Homeland Union) and LVŽS (Peasant and Green Union). Of course one of them will eventually be first and will claim it won, but in the multi-mandate district they both won. By the way this is a good example of the bandwagon effect at work for two parties, even if it wasn’t immediately obvious based on ratings (Bandwagon effect – when the leading party is joined by a few extra percent of voters who had been so far undecided because these voters feel the party will win).

A more open question is who their friends will be. The situation is unique when both the results in multi and single-mandate (these are particularly important, more on that in a later entry) districts are roughly tied between the TS-LKD and LVŽS (at the time of writing, 41 each), making them the main competitors.

It was already clear prior to the election that the LVŽS had earned another lease on life, but many doubts were had for the Liberal Movement, which wins this category for them.

Let the Liberals not be mistaken, the voters have not “forgiven” them. Of course the logical hypothesis (and we will test it later in the national electoral study) is that finally the latent liberal electorate joined the elections: the younger individuals with fairly progressive views, but earlier having voted passively. Nevertheless let us not undervalue strategic voting: a part of voters could vote not because the ideology is appealing, but because there was little else to choose from. Or they wanted a change in government, but feared that the Liberals would fail to enter parliament without their votes, precluding any changes.

The Liberal Movement earned trust which in part they did not deserve. Their electorate will observe the party under a magnifying glass now.

Unambiguously it is Valentinas Mazuronis, who took over a battered, but still firmly over the 5% barrier Labour Party from Viktor Uspaskich. And then plunged it to the bottom.

Key points were incapability (or unwillingness) to deal with ministers radiating incompetence, a hopeless campaign (would anyone want to debate, why this campaign was doomed from the get-go?) of stopping refugees and V. Mazuronis’ refusal to become a candidate, which I am convinced, became the final nail in Labour’s electoral coffin. Kęstutis Daukšys cannot be blamed, having been forced to jump into a ride he wasn’t intended for.

It is a tough choice between Naglis Puteikis and Kristupas Krivickas’ coalition (who earned a different award in the end) and Labour, however numbers and general decline (losing over 200,000 votes) earns the Labour Party this award.

As observed by many colleagues their decline in votes is spectacular, from hero to zero. It is the first party in our electoral history to earn the most votes in election t-1 and then fail to enter parliament in election t.

The failure is even more spectacular when we consider that the Labour Party has one of the largest party bases in Lithuania, based on membership. Discounting their own and their relatives votes, it appears that no-one honestly voted for Labour. Let me remind again – if your reputation is zero, you can multiply it by whatever you want and you will still get zero. No mandates from the multi-mandate district.

A Special award for a Special coalition - N. Puteikis and K. Krivickas

Greed kills even in elections. If both politicians have stuck to candidacy in the Lithuanian Centre Party list, they could have used the same anti-corruption campaign. And would be in parliament. But they wanted names. Now they will at most have one mandate.

Egidijus Vareikis, who rose from 141st to 23rd in the LVŽS electoral roll and from the looks of it has secured a seat in Seimas. Who could have thought that the narrative of redemption would work in Lithuania as well? Who could have thought that the best place for a politician with alcohol problems to rehabilitate himself politically is in the ranks of the LVŽS which has declared a holy war on alcoholism? Perhaps many didn’t think so, but Egidijus Vareikis played a great game here. You may dislike the individual, but if they manage to rise up from the total bottom and be elected, it is a noteworthy achievement.

Let us be honest, when the photo of Paleckis’ poster spread in Facebook, we did not see him as a serious candidate. Now it is very likely he will earn a mandate because the TS-LKD candidate Monika Navickienė will struggle in a district dominated by national minorities (but it isn’t impossible, we’ll see; LLRA candidates have fallen here in second rounds). This 30% of his is concerning because this is one of the most pro-Russian and anti-establishment politicians in Lithuania. If he can win in Vilnius, even if it is New Vilnius [Naujoji Vilnia], then we can see certain concerning signs in a certain part of society.

It looks like this trio may be enough to get this party into Seimas: Remigijus Žemaitaitis, Kęstutis Pūkas and Petras Gražulis. Some say that this is Rolandas Paksas’ trademark at work here. Others think this is some sort of sect. I remember again that in the 2012 post-election study, bar pro-Soviet stances, the Order and Justice electorate was unexceptional (not in age, not in income, not in some other values. On the other hand, while such unknowns remain, you continue to want to research such electoral behaviours.

Election victory in a single-mandate district – Ingrida Šimonytė‘s first round victory in Antakalnis
First round victories in large cities are particularly rare, to be honest I cannot recall such a case at all (except in 2000, but that doesn’t count due to a second round not having happened at all). Keeping in mind that Antakalnis is not exactly homogenous, just like any other city district, this is a particularly impressive feat.

Not because of the name, but for the intense competition. Thanks to buddy Marius Taparauskas, who pointed this out: first place – 2943 votes (Mindaugas Bastys, LSDP), second – 2932 (Arvydas Vidžiūnas, TS-LKD), third – 2915 (Vidas Cikana, Anti-Corruption Coalition). Just look at political analysts claim that a few votes change nothing.

Leader of the election, politician category

It would be tough to give the award to the LVŽS, after all they threw one electoral bomb after another there like some sort of Splash Brothers, splitting the spotlight. Meanwhile Gabrielius Landsbergis, like LeBron, carried the team on his shoulders and became the politician, whose party earned approximately as many votes (now around 22%), as he had supporters; an enviable mobilisation.

At the same time he is currently (based on the VRK’s latest data) the politician with the most rating points – 122,705.

The two mentioned in the previous category win here with little competition. (Election ticket cases occur in the US, where a single election choice fills more than one political office or seat).
Just like a President – Vice-President pair in US elections, these politicians proved that Lithuanian elections can accommodate a “two headed” party, an individual clear leader is not mandatory.
Well, the last category only has one participant, but it became important only on most of the votes being counted. It is the incumbent coalition government. The government headed by the popular Algirdas Butkevičius which managed to earn (adding together vote percentages for the LSDP, Order and Justice and Labour Parties) fewer votes than the government of the unpopular Andrius Kubilius (TS-LKD, Liberal Movement, Liberal and Centre Union) in the 2012 election; 24.51% today versus 25.71% then.