Landsbergis not dismissing possibility of working in opposition 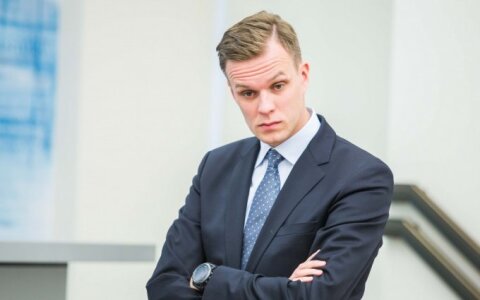 Homeland Union – Lithuanian Christian Democrat Chairman Gabrielius Landsbergis is not dismissing the possibility that the Lithuanian Peasant and Greens Union will first negotiate with the Social Democrats.

When asked if he is implying they will work in the opposition, Landsbergis deflected by saying “We are in no rush to take power.”

“This means that we are talking about work and principle. And all those red lines which were drawn prior to the election, during debates, all that and many things are unacceptable to us. Speaking of professionals, whose names have been brought up, to be honest their professionalism raises much doubt – are these truly those we can call professionals? And their competence… Well, honestly, I am viewing this more than carefully,” stated G. Landsbergis.

Related articles
ELECTIONS over – who will govern?
Landsbergis apologizes for poor conservatives' results but plans to stay on

He highlighted that the most sincere congratulations to the “Peasants” was from the Polish Electoral Action in Lithuania, which earned 8 Seimas seats.

That said, Ramūnas Karbauskis has earlier said that he sees no opportunity to build a coalition with the Poles because he does not agree with its stance on writing non-Lithuanian names in personal documents. Meanwhile Saulius Skvernelis did not dismiss the possibility of cooperation.

When asked under what conditions he would partner with the “Peasants,” Landsbergis said that everything will depend on R. Karbauskis’ party, adding that “I will repeat the principle – the inability to choose a clear direction already displays a wavering value base. Let’s put it that way.”

According to the Conservatives’ leader, it is difficult to specify what mistakes the party made. “We need more in-depth analysis of what occurred. In some single-mandate districts, such as those of Kaunas, we had a strong first round lead, but failed in the second. It appears to be a wave of sorts, people view those differences otherwise.”

The politician stated that their voters would be disappointed if the Conservatives supported certain ideas proposed by the Peasant Greens. “I do not dismiss the possibility of being in the opposition, I believe that voters would be even more disappointed if G. Landsbergis and the Conservatives voted for state pharmacies and state alcohol monopoly.”

The Lithuanian Peasant and Greens Union earned 56 mandates in this election (formally 54, with 2 extra mandates from Povilas Urbšys and Bronislovas Matelis joining). The Conservatives will have 31 seats in Seimas, the Social Democrats most likely will have 17 mandates, while the Liberals – 14. Another 8 mandates go to Order and Justice, the same amount to the Polish Electoral Action.

The Labour Party will have 2 mandates, while 3 mandates are split between the small parties – Lithuanian Centre Party (Naglis Puteikis), List of Lithuania (Aušra Maldeikienė), and Lithuanian Green Party (Linas Balsys). Another 2 elects are independent candidates.

Landsbergis not dismissing possibility of working in opposition