Karbauskis, one of the wealthiest men in Lithuania 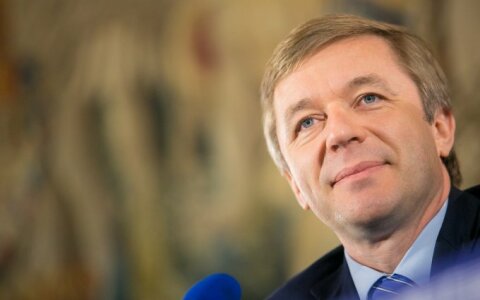 The Chairman of the Lithuanian Peasant and Greens Union Ramūnas Karbauskis is also held to be one of the wealthiest citizens of the country. How much money and property does he actually have?

As all other members of Seimas, he has had so submit a property and income declaration to the Central Electoral Commission (VRK). In it, the potential architect of the new coalition government declared €2.05 million in mandatory registration property. Furthermore he has declared stocks, artwork and jewelry worth €9.37 million. Another €103.7 thousand is declared in cash.

Based on publicly declared information, this totals at roughly €11.5. This is significantly more than any of the incumbent members of Seimas in 2015. For example Social Democrat Bronius Bradauskas‘ family‘s wealth is valued at €8.2 million, that of Stasys Brunza at €4 million, according to recent VRK data.

Related articles
ELECTIONS: Peasant and Greens Union in brief
ELECTIONS. Karbauskis on what matters to the 'Peasants and Greens'

Nevertheless R. Karbauskis’ declaration does not show everything about his wealth. Investor’s Association managing chairman Vytautas Plunksnis counts that the amount could be up to ten times larger.

“If we look at the balances of two companies directly controlled by Karbauskis – UAB Agrokoncernas and UAB Agrokoncerno Grūdai, their capitals on the 30th of June 2015 were respectively €77.4 million and €14.7 million.

With a conservative calculation we get €92.1 million in wealth. However profitable (making respectively €5.7 million and €0.8 million in the 2014/2015 financial year) companeis should be valued at beyond their immediate capital,” Plunksnis commented.

The expert adds that the politician has other wealth, which is very much limited in supply not only in Lithuania, but the whole world – land.

“Another important question is – what is the value of the Agrokoncernas group’s agricultural land? In the balance it is indicated to be €28.5 million, but it is likely that the prices of the land have risen since their purchase. As such it is fair to claim that R. Karbauskis‘ wealth exceeds €100 million. By how much is a question of deeper analysis,” explained the chairman of the Investor’s Association.
According to him the declared value of property is lower than it really is because declarations request nominal value, not market value. But since the politician’s stock is not sold on the stock market, it is only possible to find out the price after the stocks are sold.

That said, when queried about his wealth, Karbauskis himself noted that one important factor is being forgotten. “I do not value it in any way because you do not know one number and nobody has ever examined it. That is how much I and the companies have borrowed from banks. This is not something I will reveal because I do not have to. Overall I can simply say that my businesses have borrowed the most. In Lithuania there is probably no other company like this.

If the banks provide you with the information separately, I cannot provide it, it is confidential, and the banks would not want me disclosing it. As such when evaluating wealth, It is a number that should be known.”

According to the politician, all the purchases made by him and his companies (land, bankrupt companies) were made through credit.

“I have signed what very few businessmen have signed. I am responsible for every loan with my personal wealth. Businessmen who dare do so are in the single digits, but otherwise I would not receive credit.

So how should you evaluate – am I wealthy or not? Everything I own belongs to the banks as collateral. If something malfunctions or happens, I would lose everything,” explained the leader of the LVŽS.

In 2015 the IQtop journal rated R. Karbauskis’ wealth at €151 million. This placed him 10th in the list of the wealthiest in Lithuania, exceeding well-known businessmen such as Augustinas Rakauskas (€123 million), Tautvydas Barštys (€117 million), Arvydas Avulis (€105 million), Visvaldas Matijošaitis (€90 million) or Gediminas Žiemelis (€88 million). R. Karbauskis was exceeded in the list by such individuals as the main owners of the VP Group, the owner of MG Baltic Darius Mockus, Achema Group shareholder Lyda Lubienė and others.

In august, the Veidas journal also announced a list of the wealthiest Lithuanians. In it R. Karbauskis ranked 23-25, with a valuation of €55 million.

It is of note that in the Civil Code it is postulated that wealth obtained after marriage is held to be shared propperty of the couple. It is assumed that wealth is split evenly, thus in case of a divorce it would be divided in two. R. Karbauskis is currently married with Lina Karbauskienė, who has been living in Spain for a number of years now.

What will happen to the business?

The Agrokoncernas Group is presented in its website as “one of the largest partners in agrochemical service, agricultural produce sale and other spheres of agriculture for Lithuanian farmers.”

It is indicated that the business was started in 1990 with a small sales company which provided consulting services, which has now grown “into a union of 50 dynamically expanding companies, which can provide Lithuanian farmers the best services, most advanced technologies and highest quality goods at competitive prices.”

In a recent Delfi conference Karbauskis denied having any suspicious business links with Russia, stating that if connections to Eastern markets exist, they are not large and if they needed to cut them off, little harm would come of it.

The politician also assured that while working in Seimas he will not be a member of the Rural Affairs Committee, not will he vote regarding legislation which could impact his business and raise doubt regarding potential conflicts of interest.

When asked if he isn‘t considering stock sales to avoid that, Karbauskis stated that „I do not understand how to do it <...> what would it change? Would your stance on me change if I transferred the stock to my father or brother? Most likely not. Such a demand is not present for anyone in Lithuania because it would change nothing.”

According to the Chairman of the LVŽS, it is long ruled that members of Parliament are not permitted to earn from activities which cannot be combined with work as a member of Seimas, however income from stocks or agriculture are permitted, so he is not breaching any law.
Delfi reminds that prior to the 1996 election, a public biography of Karbauskis wrote that “In 1993 founded the company Agrokoncernas. He works as the president to the present day.

The latter is one of the largest producers of fertiliser in the neighbouring country and the entire world. It is owned by one of the wealthiest businessmen in Russia Vyacheslav Kantor (2.6 billion US dollars in wealth, 33rd on the Forbes list of the wealthiest in the planet).

This Kremlin-affiliated oligarch has recently been re-elected for the third time as the European Jewish Congress President. During a meeting with him, Vladimir Putin invited Jews fleeing a new wave of Anti-Semitism to Russia.

R. Karbauskis denies any links to Acron and Russia and its businessmen altogether. The word “represent” used in the biography supposedly only means that Agrokoncernas sold the fertilisers of said company.

“The word “represented”, if it was written, it only means “sold”, had the right to purchase and sell; a right some twenty other companies in Lithuania have.

The fertilisers from Russia were purchased by all European companies because potassium and phosphorus is extracted from excavated materials. They exist nowhere else in Europe, only Belarus and Russia,” said the LVŽS leader.

Karbauskis, one of the wealthiest men in Lithuania