NATO battalion in Lithuania to have tanks, IFVs 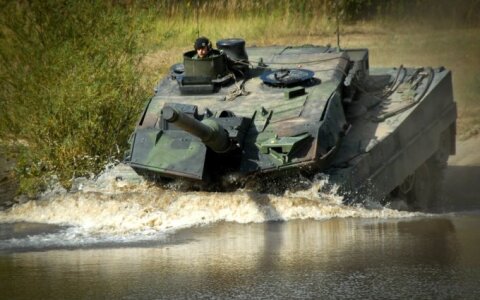 NATO's multinational battalion to be deployed to Lithuania next year will have both tanks and infantry combat vehicles, Defence Minister Juozas Olekas said on Wednesday.

"The Germans will bring infantry combat vehicles and tanks with them," he told reporters in Brussels after a meeting of the Alliance's defense ministries.

The German-led battalion is to be stationed in Lithuania early next year to deter Russia.

Olekas confirmed that German Leopard 2 tanks would be deployed as part of the battalion, but he gave no details about other equipment to be stationed in Lithuania.

The Benelux countries, Norway, Croatia and France are also expected to contribute troops to the German-led battalion of around 1,000 to 1,200 soldiers.

NATO's multinational battalions are also to be deployed to Estonia, Latvia and Poland next year.

NATO battalion in Lithuania to have tanks, IFVs