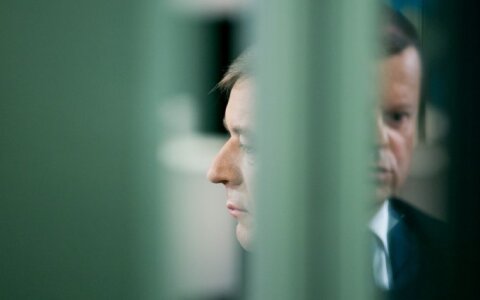 Though the leaders of the Lithuanian Peasant and Greens Union (LPGU) have kept repeating that they will work with the ministerial cabinet as one, but the first steps of the new government have been accompanied by clashes. What do the first sparks between “Peasant” leader Ramūnas Karbauskis and LPGU-delegated Prime Minister Saulius Skvernelis show, Alfa.lt asks?

If after the Seimas election we could see only minor mismatches of R. Karbauskis and S. Skvernelis’ opinions in the public sphere on questions such as regulating artificial insemination, optimising the higher education network, then the value added tax (VAT) exemption for heating costs became the first serious face-off between the two “Peasant” leaders.

Related articles
What prevents opposition to R. Karbauskis in Seimas?
New and future parties leaders: Who will rise from the ashes and whose end is nearing?

R. Karbauskis, having spoken about abolishing the aforementioned exemption, changed his mind that the decreased tariff for heating costs should be in place for another half a year, while the compensation system is reformed. Meanwhile PM Skvernelis directly stated that the VAT exemption should be abolished. The result – the Seimas chose to listen to “Peasant” leader Karbauskis and not the PM, voting to extend the duration of the exemption for another half a year.

Perceives a balance of power

Alfa.lt spoke to Vytautas Magnus University (VMU) humanitarian sciences doctor, political scientist Algis Krupavičius, who said that the clash between Karbauskis and Skvernelis on the VAT exemption is more of a consequence of the still disorderly work of Seimas and the cabinet, rather than a conflict.

Nevertheless the political scientist admitted that for now it is clear that the leader of the “Peasant” fraction R. Karbauskis has more power with 60 members of the fraction in his hand, rather than the party’s delegated PM Skvernelis. That said, Krupavičius believes the situation could soon change.
“I would say that the centre of power is currently in the parliament due to a simple reason, it is because the cabinet was still being formed, the ministers were being selected and S. Skvernelis himself admitted in recent days that normal cabinet work will commence after the budget is passed. Even the ministry leadership has not been fully formed yet. Thus, no doubt, in those decisions a certain vote goes to both the Prime Minister and to the representatives of the parliamentary majority, R. Karbauskis among them.

Thus I would say that for now there are more decisions and decision making power in the parliament, but this will equalise and the cabinet has prospects to be a very important actor. And here the parliament will have to act creatively in order to compete with the cabinet in power,” commented Krupavičius.

Regarding what Seimas and cabinet relations could be in the future, it appears that they may not be overly favourable. According to the political scientist this is displayed by S. Skvernelis’ ministers’ and the “Peasant” party’s differences of opinion in, for example, questions of the number of higher education institutions in Lithuania.

“Some of the current ministers have declared significantly different opinions in certain questions, compared to those in the government programme. Another thing – the Peasant and Greens Union campaign promises. If the ministers start acting differently than outlined in the programme or completely opposite than promised during the campaign period by the Peasant and Greens Union, there is no doubt that there would be far more premises for conflict. And such a danger exists,” pointed out A. Krupavičius.

Karbauskis in control of the situation, but...

ISM Management and Economics University docent, political scientist Vincentas Vobolevičius, just as A. Krupavičius, stated that R. Karbauskis and S. Skvernelis‘ clash regarding the VAT exemption for heating costs is not quite a conflict. Neverhtless, Vobolevičius pointed out to Alfa.lt, it is clear that this event displayed that the centre of power is currently in the hands of “Peasant” leader R. Karbauskis.

“I do not think that such conflict is possible (between Skvernelis and Karbauskis – Alfa.lt) simply because the large “Peasant” delegation in Seimas contains a significantly smaller number of “Skvernelists” than “Karbauskists”, which is well illustrated by the voting results (32 LPGU fraction members voted in favour of extending the exemption, 10 were against and 9 abstained – Alfa.lt).
This is why I would speak of not a conflict because only a fool would enter a conflict in Skvernelis’ shoes, but a divergence of opinions, where the final decision is made by the one who has more political weight in this case,” commented Vobolevičius.

Will R. Karbauskis continue to dictate conditions to the cabinet? V. Vobolevičius believes that this will depend on voter’s favour for the “Peasant” leader and the Prime Minister.

“We have to keep watch of what R. Karbauskis’ ratings will be, what the ratings of the “Peasant” party will be. If R. Karbauskis’ or the “Peasants” ratings decrease, while S. Skvernelis maintains adequate distance and his ratings do not decrease, then naturally both current “Peasants” and members of other fractions will drift toward S. Skvernelis. With more support in both the public sphere and from members of Seimas who would begin to demonstrate loyalty, he could enter more open conflict with R. Karbauskis. But the premise for this is a change in public opinion,” noted the ISM Management and Economics University docent.

V. Vobolevičius believes that the mostly non-partisan ministerial cabinet with S. Skvernelis at the front has yet to develop sufficient teamwork, thus they will not dare oppose R. Karbauskis’ Seimas majority. That, according to the political scientist, would result in the obstruction of legislation proposed by the cabinet, leaving Skvernelis only one way forward if he wants to take the centre of power into his own hands.

“A conflict has to happen or the PM must back down. In this case since the party leader, the real centre of power is not the PM, but the chairman of the “Peasant” party, then either the PM will have to back down or he will have to overthrow the “Peasant” leader and become the party leader himself, thus taking control of the Seimas majority. Whether that will happen is a big question, it will depend on public opinion,” explained V. Vobolevičius.

“It appears that they are not communicating for now or have yet to coordinate on some questions,” says VMU docent, political scientist Bernaras Ivanovas, when inquired by Alfa.lt why voters have been witness to several clashes between “Peasant” leader R. Karbauskis and PM Skvernelis.
According to the VMU lecturer, R. Karbauskis imposing his ideas has left the cabinet with mixed feelings.

“Questions arise, who is Karbauskis based on his status? Is he a grey cardinal, a prefect of Lithuania or something else? There is the PM, the president, the coalition, some sort of coalition council, but who is he?

This shows that Lithuania is sliding from an interinstitutional, more systematic variant to a post-soviet variant, where of course everything is based on not institutions, but on the will of peculiar actors and some sort of authority, resources they have accumulated, oligarchs. Oligarchic government is most visible in Ukraine,” mused B. Ivanovas.

“It is clear that there already is competition (between Karbauskis and Skvernelis – Alfa.lt). S. Skvernelis, I believe is used to being independent and he may begrudge attempts to tell him how to act every single time. <…> We see the national aspect which appears in not just Lithuania, but also Poland where we have J. Kaczynski. All that is rational is side-lined, national, romantic or even pagan emotions surface. Or otherwise an individual interpretation of conservative thought. That said conservativism is very fragmented <…>.

S. Skvernelis is likely intent on rationalising such policy somewhat, but he is neither in the party, nor has he been in politics for 20 years, so I believe he does not really have any chances,” the political scientist explained the balance of power between Seimas and cabinet.

The VMU docent believes that relations between Karbauskis and Skvernelis will continue to be dynamic in the future.

“I believe that R. Karbauskis will try to form his agenda more, while S. Skvernelis will try to react to it. Either way, I believe that Karbauskis’ agenda will be a surprise for many voters, already the first decisions became surprises for many. Say, many were expecting a 40 euro raise in pensions, but they were raised by far less,” pointed out the political scientist.