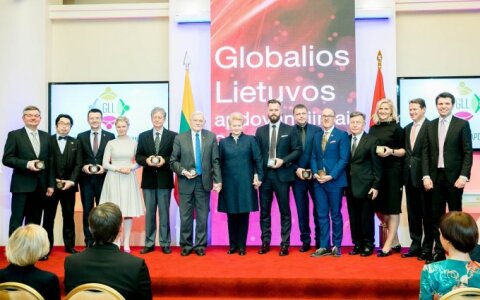 On Wednesday, December 28, guests and laureates for the Global Lithuania Awards 2016 gathered at the presidential palace. With the now fifth year of these awards, international Lithuanians and Lithuania-related business, culture and science professionals, talents seeking to create a successful and acknowledged Lithuania on the global level were honoured.

This year 37 nominees in 10 different categories from 14 different countries were presented in the Global Lithuania Awards. The patron of the awards, President Dalia Grybauskaitė presented laureates with statues, representing the ideas of strength and integration, made by sculptor Stasys Žirgulis especially for the event.

This award went to the inventor of the sonar Deeper, Aurelijus Liubinas. The smart sonar Deeper is a wireless implement to seek fish, which scans the bottom of a body of water and send information to the fisherman’s smart phone. It is the first sonar in the world to be compatible with smart phones. Deeper was acknowledged as the most innovative product in the wireless accessory category in the largest tech show in the world, Consumer Electronics Show 2016.

Professor Feliksas Bukauskas who has lived and done research in the United States for a long time received this award. In 2016 the professor gifted the Lithuanian Healthcare University 350,000 US dollars’ worth of scientific equipment and genetically modified cell lines. A group of scientists under the name of professor Bukauskas was established in the molecular cardiology lab, its work based on connections and the properties of the gap junction channels formed by them, pathological conditions and their impact on the activity of the heart and nervous systems.

Contribution of international experience to changes in regions

Jonas Sluckus was awarded in this category. With experience obtained in Sweden and Norway he returned to Lithuania in 2005. He endeavoured to ensure that the Swedish company Bigso, which already had a factory in Šiauliai and planned on expanding, would invest in a new production line in Venta, in the Akmenė region. Currently the modern cardboard box factory employes around 400 staff and exports its products to 21 countries, including servicing orders from large international companies (including IKEA).

Kenjiro Tamaki from Japan was acknowledged with this award. In 2013 he established a Japan-Lithuania exchange centre which seeks to strengthen the business and science community links between the two countries, to make the name of Lithuania known in Japan. With a vast amount of professional experience in international business, he consults Lithuanian companies in questions of export and business environment, helps seek partners in Japan, organises events in Tokyo, Osaka, Kobe, Yokohama, Hiratsuka and Yaotsu, where Lithuania is presented.

This award acknowledges Darius Vaškelis. Having been born and raised in the USA, but always contributed his long time professional experience, Darius Vaškelis has maintained a constant link to Lithuania. Darius is the co-founder of the company OneWindow, his mission in the company is to help clients optimise and evaluate income and management costs, considering business, market entry and sales strategies. Darius Vaškelis is an active participant of the Global Lithuanian Leaders programme Mentors for Business.

A special award was given during this year’s event – “A special award for a decade of valuable contributions to Lithuania”. This award went to the London City Lithuanian Club (LCLC) on the 10th anniversary of their successful activity. LCLC links more than 60 professionals, who work in London finance, investment and law companies and initiate various projects, contribute to charity, educational and mentoring programmes for Lithuanian youth. The club is actively contributing to the formation of the Lithuanian image in the international sphere and attracting investment to their home country.

Making Lithuania known in the world

Based on voting from Delfi.lt readers this award went to Virginijus Šikšnys. Professor Šikšnys is the first Lithuanian scientist to be awarded the prestigious Warren Alpert fund award for a significant contribution to the understanding of the antiviral protection system of the CRISPR bacteria. His team was one of the first research team in the world to discover that the Cas9 protein can be used for accurate DNA regulation, thus paving the way for treatment of genetic disease.

President Valdas Adamkus was awarded an award for lifetime contributions, stating in his reception speech that “Global Lithuania Leaders has long existed, long created and changed the world with its political, economics, culture and science talents. Lithuania is actively and creatively participating in creating the world of tomorrow, as is the world participating in creating the Lithuania of tomorrow. Being global is a definite challenge for us, however it is also definite opportunities, it is our historical opportunity to seek progress. <…> I accept this honourable award not as a personal acknowledgement, but as a sign of solidarity in our mutual work. I am glad to know that every day we work silently and patiently for Lithuania, one that is global, spread around the world, but once again returning to its homeland, to its national and spiritual roots.”

The Global Lithuania Awards celebrate international professionals who associate themselves with Lithuania, who through their talent and work open new global opportunities and perspectives for Lithuania. The awards seek to notice and acknowledge the weighty contributions of global Lithuanians.

The Global Lithuanian Awards are organised by the international network of professionals, Global Lithuanian Leaders, which gathers representatives of the Lithuanian diaspora to make their homeland’s name known, to strengthen its economic and public potential and to create global opportunities for Lithuania. The awards were organised in partnership with the Ministry of Foreign Affairs, chief sponsor IT and telecommunications company Teo and Omnitel, bank DNB, lawyer firm Cobalt, International linen brand LinenMe, news portal Delfi and the LRT television which contributed with a direct broadcast.

President Dalia Grybauskaitė is the patron of the Global Lithuania Awards.