Some SocDems snap – coalition with “Peasants” needs to be reviewed 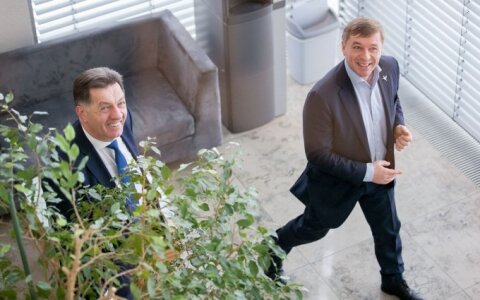 Facing a leadership crisis and internal bickering, the members of the Lithuanian Social Democrat Party (LSDP) have snapped – the decision to join a coalition with Ramūnas Karbauskis’ “Peasants” is being described as a mistake which threatens the survival of the party.

Apparently the question of further SocDem participation in the current coalition is to be reviewed, if not now then after the LSDP chairman election. The election is to be held during party congress on the 6th of May.

The potential to review how justified remaining in the coalition is has been talked about not just by branch members, but also by influential core members.

The Social Democrats are concerned that the current situation threatens the party with a loss of leftist voters who chose to support the “Peasants” in the latest election due to their declared more socially responsible leftist ideology.

Karbauskis notes that Social Democrat confusion is already evident in Seimas when voting for certain questions, while if necessary, the “Peasant” proposals can easily find support from among the opposition.

The first signs of discontent regarding the formed LSDP-“Peasant” coalition appeared in the Social Democrat branch chairmen and party management meeting in Kaunas.

“The situation is as follows – the “bottoms” are unwilling to continue as before, while the party “heads” are unable to control the situation,” LSDP Lazdijai branch Chairman Saulius Petrauskas revealed to Delfi. He also noted that the meeting only happened after long discussions and at the request of party branch representatives.

Petrauskas also pointed out that the negotiation proceedings was not revealed to the branches, nor were their opinions consulted, which led to many bitter complaints toward Algirdas Butkevičius himself during the meeting. He noted that the branch heads felt the party‘s interests were poorly defended and the “Peasants” failed to give off an impression of trustworthiness, given the “Peasants’” unilateral blocking of Julius Sabatauskas as a candidate for the post of Minister of Justice. The branch chairmen were also concerned that the party was threatened with being left in the shadow of the “Peasants”.

Akmenė region municipality mayor and head of the local SocDem branch Vitalijus Mitrofanovas concurred, noting that given how most of the Social Democrat members of Seimas were elected through the multi-mandate district, it is expected that the members of the party who contributed their votes should have had more say and that the government programme does not reflect the Social Democrats’ campaign proposals at all.

Concerned they will be left unheard

There should be an LSDP presidium meeting this coming week, while at the end of January – a party council meeting. That the question of continued Social Democrat participation in the coalition will be discussed was also confirmed by LSDP deputy chairman Gediminas Kirkilas.

The politician pointed out that such questions could definitely be raised when a new leader is being considered and stressed that despite the coalition agreement being signed and negotiations ended “it is always possible to negotiate for more and better.”

He explained out that it will be impossible to disregard the opinions of party branches, particularly their scepticism, but at the same time with negotiations concluded and the cabinet already working, it is unclear how much could be changed.

S. Petrauskas, who is also an LSDP council member, is however concerned that the rank and file of the party, the branches, will be disregarded, despite the coalition question being an existential issue because the current status quo is, according to Petrauskas, convenient for those with seats in Seimas.

When asked to comment on the developing situation, LSDP Chairman Algirdas Butkevičius reminded that the party council voted in favour of the coalition, with only a handful of members abstaining or voting against.

Butkevičius explained that it is likely the same handful who had doubts that are speaking up, but overall painted the information spreading in the public sphere as rumours being intentionally distributed, while the party is not even considering the issues discussed, not in party management, not in the presidium or the party council.

As for the concerns that leftist voters may shift to the “Peasant” camp, Butkevičius stated that “who voters will choose depends on the politicians’ work, activity and interaction with society”, that voters would chose the politicians they trust.

Given the small size of the Social Democrat fraction after the less than successful elections, A. Butkevičius expressed belief that the positions obtained are a very optimal outcome, despite earlier talks that the SocDems could aim for 5-6 ministries.

As an example of negotiation success Butkevičius highlighted the party’s acquisition of two Seimas Deputy Speaker posts, rather than the originally discussed one, with the posts going to Gediminas Kirkilas and Mindaugas Bastys. The latter obtained the position only after A. Butkevičius’ candidacy for it was not approved during voting in Seimas, where 66 members of Seimas voted for Butkevičius, 53 against and 14 abstained. For the appointment to be confirmed the number of “for” votes has to exceed the number of “against” votes and abstentions. Butkevičius failed to receive support from not only some “Peasant” members, but also some of the Social Democrats.

There is a general consensus that the question of remaining in the coalition arose with the nearing of the LSDP congress and chairman elections. After a more painful than ever before loss in the Seimas election, the signs of a leadership crisis and internal conflict have surfaced in the party, with this influencing the coalition negotiations.

G. Kirkilas stresses that “everything depends on personalities” in politics, using the example of the situation when the Social Democrats obtained the post of Prime Minister for Algirdas Brazauskas during negotiations with the New Union and Labour Party a decade ago. This is to show that it is always possible to negotiate for something better, even if the current situation is far more difficult due to the strength of the “Peasants”.

In this case Kirkilas points to a lack of a strong leader in the Social Democrat party as the reason for the Seimas election results and later outcomes in the coalition negotiations.

“In our fraction we may not feel it [the lack of a leader], but in the party it is definitely the case. Particularly now with the beginning of elections for a practically new chairman, with party groups already proposing their candidates,” said the member of Seimas.

It is an open secret that a fierce internal struggle for influence has erupted in the Social Democrat party. A number of members of Seimas are leading their groups in a struggle for not only influence, but also for the candidacy of party leader.

When asked who he sees as the next party chairman, G. Kirkilas did not attempt to conceal his support for MEP Vilija Blinkevičiūtė.

Meanwhile A. Butkevičius has declared his support for the current Minister of Economy, former Mayor of Jonava region Mindaugas Sinkevičius.

After the agreement was signed, the ministries of economy, justice and foreign affairs were left in the care of the Social Democrats, with the remaining posts and key positions in Seimas going to R. Karbauskis‘ “Peasant” delegates.

Some SocDems snap – coalition with “Peasants” needs to be reviewed