Adamkus and Landsbergis reflect on the Obama presidency 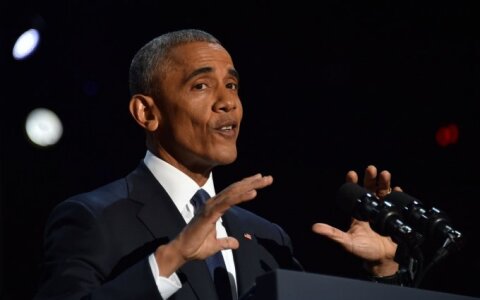 Barack Obama led the United States of America for two consecutive terms and his farewell speech is undoubtedly going to go down in history says former Lithuanian President Valdas Adamkus. B. Obama was the first black US President. According to Adamkus, Obama always firmly stood up for democratic values and during his term in office the Baltic States experienced solid backing Alfa.lt reported.

He met with Baltic heads of state a number of times, clearly spoke up for a consistent foreign policy line. His wish was to remove tensions between Russia and the USA, which had reached a critical point,” stated V. Adamkus.

The former president notes that while the 8 years of Obama presidency would be viewed positively in history, he was unable to accomplish everything.

“The only difficulty left behind by him is that of domestic life in the US. Reducing crime and tension. Racism, shootings in schools. Unrest. This would be the only complaint, that he did not manage these issues well enough. Whether he achieved what he intended in healthcare is unclear as well,” stated Adamkus.

B. Obama has called V. Adamkus during his presidential campaign. That said they were unable to sit down for a more in-depth discussion during Obama’s term. Nevertheless V. Adamkus warmly remembers their first face to face meeting in Prague.

“Our first meeting in Prague, where EU leaders had gathered, is particularly memorable. Prior to a reception there was a lunch gathering. Of course everyone… he had just been elected… everyone tried to practically elbow their way to him. I stood at the side, watched the proceedings. My members of staff urged to approach, but I awaited an opportunity. Then the distance between us shrunk to 2-3 meters, I approached and congratulated him, saying that we have much in common. He looks at me and says – you are Adamkus. It was a surprise to me, instead of me surprising,” recalled Adamkus.

The first factual head of state of independent Lithuania Vytautas Landsbergis is also full of praise for Obama. Landsbergis was particularly impressed by the US president’s final dinner speech.
“Obama spoke seriously as one of the American heads of state, as a successor of the Founders who built America – Washington, Jefferson, Franklin, those who symbolise and express values, ideas and what America was and still is great for,” stated Landsbergis.

Adamkus and Landsbergis reflect on the Obama presidency