Kirkilas – Russia wants neither Trump, nor Clinton – it wants a weak America 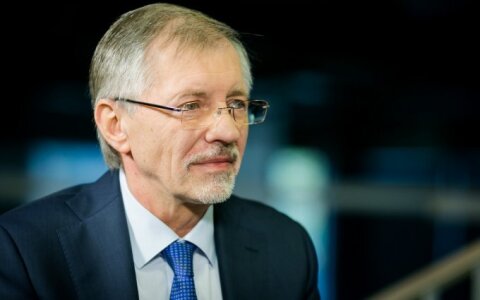 The coming 45th President of the United States of America Donald Trump could be the first to end up in a major conflict with his own country’s intelligence services. On Wednesday he did concede that Russia is the country which performed hacks of the Democrat party’s computer systems. He did not, however, admit that Vladimir Putin was aiming to influence election results in his favour. D. Trump also categorically denied reports from CNN and the Buzz Feed that V. Putin could have compromising information regarding Trump.

- Mr. Kasčiūnas, an obvious conflict is visible between the intelligence institutions and the new president in regard to V. Putin’s role in electing the US president. What can this result in?

We frequently speak of how safeguards will come into play in the USA, reining in D. Trump and his new administration, well I believe these safeguards are now coming online. I believe that the bar is being raised by giving D. Trump a large amount of information, if any deals or discussions were possible with Russia so far, it is now far harder or impossible to do it. I would even say this is positive in a sense.

- But we now have a conflict that at least I do not remember having ever happened in the US. It appears that the future head of state does not trust his intelligence services.

True, but everything has a start. It is always possible to renegotiate, draw back from one another and find common ground.

- Mr. Valatka, how do you view the current situation?

Overall I do not remember this much hysteria regarding US presidential elections. This has never happened before. On one hand it is odd, on the other it is understandable. The world is on the brink and primarily so due to the actions of V. Putin’s Russia. Some in our Seimas fail to understand this and do not know what the maps look like. Perhaps we should show the Seimas Speaker (V. Pranckietis) a map and where we are located. But there was too much hysteria. It was primarily from leftists around the world, while in Lithuania the paradox is that the left was joined by the right with some exceptions. I would say that D. Trump needs to be viewed more moderately and more wisely.

First of all, the American democracy is very strong, that is what they are displaying. Secondly, if we are to remember the previous two presidents, they also really wanted to be friends with Russia. The then Secretary of State Hillary Clinton even demonstratively pressed the supposed “reboot” button for relations. B. Obama initially tried to be friendly with Russia. George W. Bush held V. Putin to be a friend and saw some sort of great things in Putin’s eyes. But that did not prevent G. W. Bush from holding a speech in the Vilnius Town Hall Square, nor to work with NATO expansion. In the end we started looking at Obama as the departing last saviour of Lithuania, given the prevailing hysteria.

I would say we need to “reduce the throttle”. We should wait for the inauguration on the 20th. We can see that all the appointees are acting as people of America. I return back to the same map. It has not changed since D. Trump’s election, hence state interests have no changed either.

- On Wednesday Trump said that the main threat to the USA is ISIS, though intelligence organisations have identified Russia as the main threat for a while now. A certain conflict exists. Perhaps even more than a public relations conflict because D. Trump seems incapable to admit that the intelligence agencies are correct that V. Putin wanted him as president. What’s the solution Mr. Kirkilas?

I have also travelled there, I remember the Seimas delegation was of a similar state and we were thinking how things will proceed. Many senators and now future members of D. Trump’s team met there, so I can say that the sight is significantly different. The new US Secretary of State holds radical views of Russia. He has even accused B. Obama that he failed to aid Ukraine, that apparently arms and aerial reconnaissance should have been provided. The balance of government in America is such that however strong the president is, he is not unchallenged in his power and he could never sell off the national interest of his country.

Another question is that many Western European leaders hold numerous illusions about Russia. They fail to realise that the nature of the Russian government is to maintain conflict. They have to be surrounded by enemies, true or suspected. Of course D. Trump’s style will be confrontational. He is not B. Obama. Obama is a classical democrat. Trump will be different. The question is whether his strict style can be used positively.

- What first actions or reactions can we expect that would hint at future policy? Could Ukraine be the topic that would clarify relations?

L. Kasčiūnas: American sanctions to Russia. Their review of non-review will show certain trends. Another thing is NATO decisions on its Eastern Flank defence. Whether the Americans will seek some sort of review or will D. Trump initiate something. It is clear that Russian interests are obvious – to return to 2013.

G. Kirkilas: If all NATO states hold to their defence commitments, then the US will as well.

L. Kasčiūnas: Nevertheless I am somewhat worried. The allies will be defended because NATO is already a fortress. There will be no geopolitical shifts here. But speaking of Ukraine, Georgia, they could be told to worry about their own defence, with the doors of NATO being shut.

- Mr. Valatka, what actions do you think would display the new American government’s relations with Russia? Could you imagine one of the first steps being provision of arms to Ukraine?

It would be good to see and very correct. I believe it would depolarise the situation. V. Putin is going into where he knows he will not be harmed. If he is – he withdraws. The more worrying situation would be that the Kremlin is a supporter of opportunistic policy. And for example tries to organise something here over two-three weeks. Knowing our capacities that would cause problems. But I hope that will not happen.As for D. Trump focusing on ISIS, there’s many options to go from there.
What is Putin not fighting? He is not fighting ISIS. If Trump declares he will fighting ISIS, I think he will do so. And when he does, he will see that Putin is only striking out at those who are against Assad and such. In short V. Putin would be dragged out into the light of day. I think that V. Putin is very unwilling to see D. Trump fighting ISIS.

- Returning to intelligence information, perhaps we should discuss the factor of unbelievable audacity. Russia tried to enter the systems of not just one of the two most popular parties, but intelligence also mention attempts to hack into the servers of the central electoral commission, attempting to input false data, falsify results. Audacity of an unbelievable extent is becoming clear with details. A state such as the US should respond to such actions. What do you think Mr. Kasčiūnas?

There have already been talks of sanctions to Russia.

G. Kirkilas: Sanctions have already been applied in some areas. Furthermore let us not forget the expulsion of 35 diplomats. The Russians are cunningly awaiting to see if the ruling is to be called off or not.

- Mr. Valatka, what does this Russian audacity show? When a state intentionally accesses the systems of the most powerful country in the world in order to falsify election results.

It does not come as a surprise to me. This is nothing new and only serves to show that the Kremlin has changed little since the time of J. Stalin. Let us consider what is more frightening – hacking into H. Clinton’s computers or stealing all the nuclear weapon production technology? After all, all Russian strategic bombers were made based on American plans. The Russians have always spied on and stealed from everyone, not even from the time of V. Lenin or L. Trotsky, but in fact since the time of Catherine the II – since 1815. It is a country of spying.

G. Kirkilas: I would rather that we do not serve Russian propaganda. We are discussing that Russia helped D. Trump. Russia did not help D. Trump, it just did not want H. Clinton and raised chaos. That Russia was against H. Clinton’s candidacy was clear. They know her positions in terms of foreign policy, but the definitely were not keen on Trump. They do not even know who he is. No-one knows for now.

- The USA definitely has people who could probably hack into anywhere in Russia. They could start having fun even on live television. But the question is how hurt are American ambitions?

G. Kirkilas: You are very right. Acting during elections is convenient because the state itself finds it hard to react during such a time. No-one knows how things will end, do not know how to react. Russia wants neither H. Clinton, nor D. Trump, they need a weak America. If D. Trump does fulfillthe slogan “Make America Great Again” and makes America strong again, it will not benefit the Kremlin.

Kirkilas – Russia wants neither Trump, nor Clinton – it wants a weak America