Lithuania, US to sign deal on status of US troops 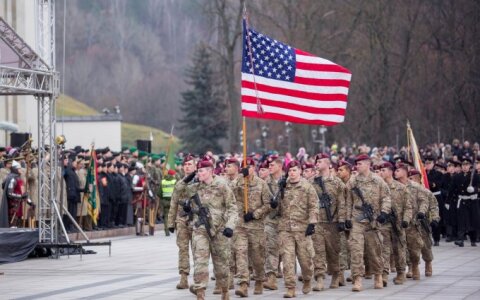 Lithuania and the United States will Tuesday sign an agreement on the status of US troops in the country, the Lithuanian Defence Ministry said.

"The document binding the signatory countries to uphold bilateral defence commitments will be endorsed by Minister of National Defence Raimundas Karoblis and Ambassador of the United States of America in Lithuania Anne Hall at a meeting at the Ministry of National Defence on January 17," the ministry said in a press release .

On Tuesday, the US will ink an analogous treaty with Estonia after signing one with Latvia last week.

Baltic and US negotiators aimed to agree on the treaties before the inauguration of US president-elect Donald Trump, as arrival of a new administration could push the issue to the bottom of the political agenda.

The bilateral agreements on defense cooperation, known as the bilateral SOFA agreements among officers and diplomats, are drafted at the US initiative. They define the status of US troops and their families. The Lithuanian treaty will take effect after ratification at the country's parliament.

Under the Lithuania-US agreement, US will have the right to try its troops for offenses, with the exception for Lithuania to take over the jurisdiction in cases of major importance. The agreement also envisages a right for the US to use certain military objects, which remain the property of Lithuania.

Since 2014, the US has been stationing a company of troops in Lithuania. A battalion from the brigade to be deployed in Poland later this year will come to Lithuania on a regular basis for training.

Lithuania, US to sign deal on status of US troops