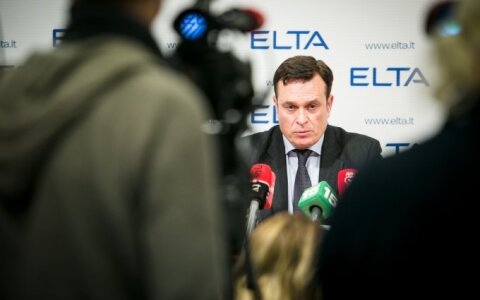 Lithuanian Finance Minister Vilius Šapoka has sacked Dainoras Bradauskas, head of the State Tax Inspectorate (STI), after a commission set up by the ministry recommended firing him for corrupt activities and gross official misconduct.

Sapoka said that information leaked by Bradauskas had adversely affected tax investigations of two large business groups, MG Baltic and Vilniaus Prekyba (VP), but added that the exact damage was yet to be determined.

"Today I signed an order to dismiss Bradauskas from his post," he said.

The minister said that Bradauskas had met with MG Baltic Vice-president Raimondas Kurlianskis, who is suspected by law-enforcement bodies of bribing Eligijus Masiulis, a former leader of the Liberal Movement, and Vytautas Gapsys, a former high-ranking member of the Labor Party, to inform him about the course of the tax investigations.

"It has been established that the STI head, Mr. Dainoras Bradauskas, used to regularly meet with MG Baltic Vice-president Kurlianskis, not in his office but on weekdays and during office hours. All the conversations, the informing about the investigations and discussions about schemes were to the benefit of these two business groups," he said.

In the minister's words, Bradauskas used "prison slang" and made disparaging comments about the state's leaders during these conversations.

Bradauskas told the Finance Ministry in his response that he was not a "desk" chief and that he had met with the heads of various media companies in an effort to increase confidence in the tax authority and educate taxpayers and thus improve tax collection.

The Finance Ministry on Jan. 4 launched the probe, based on information from law-enforcement bodies, and temporarily suspended Bradauskas from his duties.

The STI, in cooperation with the Latvian and Estonian tax authorities, has been investigating since the summer of 2015 possible tax evasion schemes at the VP Group.