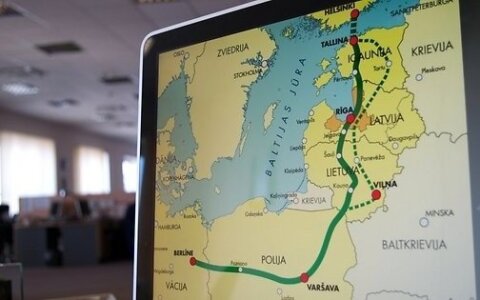 The Prime Ministers of Lithuania, Latvia and Estonia are signing an agreement on the development of the European railway Rail Baltica on Tuesday. Smooth implementation of the project is expected by 2025.

Rail Baltica constructions have currently only started in Lithuania where over five years a new 1435 mm wide railway stretch has been laid between the Polish border and Kaunas.
In Lithuania, Latvia and Estonia all railways are currently based on the Russian standard of 1520 mm.

The Baltic States began discussions of Rail Baltica in 2001 when the Lithuanian, Latvian and Estonian transport ministers signed an intergovernmental project implementation agreement, it outlined that the new rail should join the Baltics to the European rail network.

After two years the European Commission entered Rail Baltica into its list of priority infrastructure projects.

In 2004 the Lithuanian government decided that the Lithuanian stretch should be made through Kaunas, however in early 2005 the Vilnius municipality requested the government to review possibilities of a stretch being constructed through the capital. Vilnius was entered into the project only after fierce debate.

At the end of 2007 the first stage of the Rail Baltica project was initiated – constructions of railway from the Polish border to Kaunas. The first 40 km stretch was begun in 2010 and concluded by autumn 2015.

In June 2015 the Baltic States along with Poland and Finland signed a declaration on the implementation of the trans-European rail project Rail Baltica.

While implementing the Rail Baltica project a number of disputes arose between the project partners. One of them was due to the establishment of a joint company for the project. The greatest issue in the dispute was the Lithuanian wish to join the stretch Kaunas-Vilnius to Rail Baltica. This was not agreed to by Latvia and Estonia.

In the first half of 2013 Lithuania proposed to scrap the idea of a joint company, but this was not agreed to by Latvia and Estonia.

In September 2013 the Lithuanian government agreed that the project demands a joint company between the Baltic States. The transport ministers of the three countries negotiated to the last minute for Latvia and Estonia to concede on the construction of the Vilnius stretch of rail. The meeting concluded in a signing of a declaration of the establishment of a joint company.

The Vilnius branch was raised as a question once again in early 2014 when Latvia and Estonia declared that joining Vilnius to the project has to be discussed at the political level. Agreement was reached in April 2014.

In autumn that year a study by Aecom revealed that a branch from Kaunas to Vilnius would be economically beneficial and would come at a cost of around 850 million euro.

With the 2014 establishment of the joint company RB Rail another dispute arose, one regarding public procurement and VAT distribution.

Lithuania was seeking for VAT to be paid in the country where the works are being performed. Thus it pursued changes in public procurement regulations – some projects would be declared by the joint project company, while others by the individual countries.

The European Parliament Committee on Transport and Tourism Chairman Michael Cramer also warned last year that the three Baltic States could lose EU funding for the project if they continue to fail to come to agreement on implementation.

Agreement was finally found in September last year, it was decided that VAT will have to remain in the country where the work is being done, while procurements will be announced through RB Rail branches in Lithuania and Estonia, while in Latvia it would be done through the joint company.

The then head of state owned Lietuvos Geležinkeliai Sasys Dailydka was the only one of the heads of relevant institutions among the Baltic States to not sign the public procurement agreement last October, explaining it was not beneficial to Lithuania.

This caused a threat that Rail Baltica could lose EU financing. Being faced with significant pressure S. Dailydka signed the agreement.

The joint company RB Rail was established in October 2014. At the same time Lietuvos Geležinkeliai established a secondary company RB Statyba, which became a shareholder of RB Rail; it is led by former member of Seimas, Dainius Budrys of the Social Democrat Party.

In October 2015 Baiba Rubesa, formerly Vice President at Statoil, became the board chairwoman for RB Rail. The former managements of the Lithuanian Ministry of Transport and Communications and Lietuvos Geležinkeliai would often clash with B. Rubesa, with both sides openly criticising one another in many cases.

In December 2016 Artūras Vilimas was appointed head of the RB Rail branch in Lithuania, he was earlier in charge of the joint Lithuanian-Polish company LitPol Link.

The total value of the Rail Baltica railway is estimated to be between 3.7 and 5.2 billion euro. From 2014 to 2020 the EU will fund 85% of the projects implemented during the timeframe. Just Lithuania was provided around 311 million euro in 2015-2016. 106 million euro directly to Lietuvos Geležinkeliai, with the remaining 205 million going to RB Rail.

The Lithuanian stretch of rail is expected to reach 366 km in length, around 300 km in Latvia and Estonia each and 430 in Poland.

The 120 km stretch of Rail Baltica from Poland to Kaunas completed in 2015 cost 364.5 million euro, both new rails were laid and old Russian standard ones were renewed. During the implementation of the project 19 bridges, 4 viaducts, 108 rail switches, 40 overpasses, 98 culverts, 10 train stations and 20 platforms were constructed.

Rail Baltica is a component of the international transport corridor North Sea-Baltic, which will join the Benelux countries, Germany, Poland, Lithuania, Latvia, Estonia and Finland.