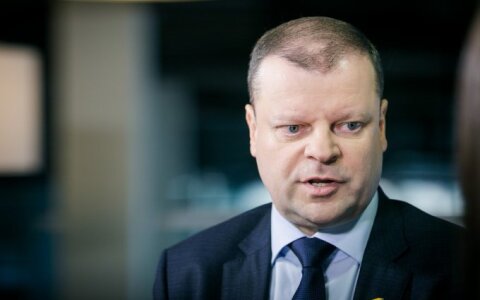 Interests of countries should not be sacrificed for backstage agreements, however, Lithuania has confidence in the United States, Lithuania's Prime Minister Saulius Skvernelis said in Brussels on Tuesday.

He spoke after the new US President Donald Trump expressed a goal of improving the relations with Russia that have been extremely tense over the past few years.

"Every dialogue is necessary, it indeed contributes to cooperation and promotes cooperation," Skvernelis said at a joint news conference with NATO Secretary General Jens Stoltenberg.

"But again – (what are) the forms of dialogue, the starting positions, what is the dialogue about and under what conditions? If this is in compliance to international standards, fundamental rights and freedoms, the dialogue is a must. Speaking about the lexis, I believe this should be a discussion among equal partners and I hope that we will never see interests of one state or another sacrificed for some backstage agreements," he added.

"Lithuania trusts the United States of America, it has always trusted the country and we genuinely see no reasons to doubt the long-term cooperation and confidence," said the prime minister, when asked about the US president's plans to improve the relations with Moscow.

Lithuania and other countries in the region have expressed concern over Trump's statements friendly towards Russian President Vladimir Putin and his remarks about the US commitments and the outdated NATO.