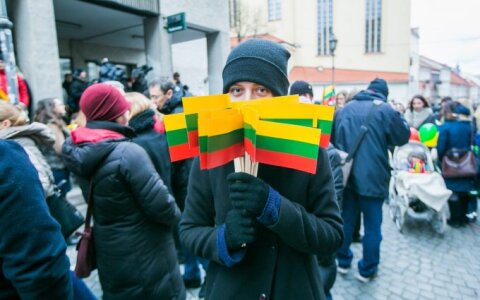 Lithuania celebrates the Day of Restoration of the State, commemorating the 99th anniversary since the nation declared independence from the Russian Empire on February 16, 1918.

President Dalia Grybauskaitė will present state decorations in the morning and will deliver a speech at a midday ceremony of hosting the flags of the three Baltic nations in Simonas Daukantas Square outside the Presidential Palace in Vilnius.

A traditional commemorative event will take place in front of the House of Signatories in Vilnius in the afternoon. Sixteen symbolic bonfires will be lit in Gediminas Avenue and a concert will be held in Cathedral Square in the evening.

In Kaunas, schoolchildren and public organizations will march from Christ's Resurrection Basilica to the garden of the Vytautas the Great War Museum, where a carillon concert will be performed and a solemn commemoration will be held.

In Klaipėda, a solemn line-up and a state flag hoisting ceremony will take place in Atgimimo (Independence) Square.

Other Lithuanian cities and towns will also hold festive events and concerts.

The Council of Lithuania on February 16, 1918 proclaimed the restoration of an independent state of Lithuania, founded on democratic principles, with Vilnius as its capital.

Happy Independence day, dear the Lithuania Tribune readers! We are going to be working on a reduced capacity today.