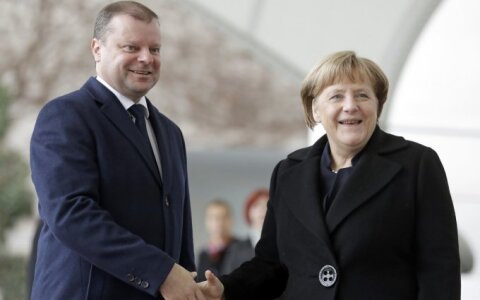 “In order to reach 2% GDP defence spending, Germany would need to raise its defence spending by 20 billion euro. Do you fear that Germany will become a powerful military state?” BNS asks. Such was a question presented to Lithuanian Prime Minister Saulius Skvernelis by a journalist from the German Deutsche Presse-Agentur during a press conference hosted by German Chancellor Angela Merkel in Berlin.

S. Skvernelis smiled and responded that “A strong Germany does not frighten Lithuania, but makes it glad.”

This short dialogue on February 23 in the German capital reflects the two countries’ moods – the Germans bearing the burden of the Nazi era are still cautious about strengthening their army and sending troops to the East, meanwhile the Lithuanians celebrate their arrival as protection from Russia.

Several hundred German troops have been deployed in Lithuania as a deterrent to potential Russian provocations following the events in Ukraine, similar detachments from various Western countries are also headed to Latvia, Estonia and Poland.

The German troops present in the Rukla military base have already been visited by both the German defence and foreign ministers, who both point out that the celebratory reception the troops received is not an obvious matter, given Germany’s historical responsibility for the actions of the Nazi regime in the region.

“This is not just a task of great responsibility to be at the head of the NATO frontline combat group and take part in the air policing mission, but also a great honour. Lithuania has had not only good experience with Germany over history,” German Minister of Foreign Affairs Sigmar Gabriel said in Vilnius.

The heritage of Nazi Germany was also remembered by Western news media. “75 years after the Nazi invasion of this Baltic country, the Germans are returning to Lithuania, this time as allies,” The Washington Post recently wrote. According to the newspaper, the German soldiers were introduced to the Nazi’s actions in Lithuania.

German attention to Nazi occupation is explained by experts as being based on a sense of guilt induced during the post-war era. It is widely believed in the country that most neighbours still have not forgotten the German or Prussian militarism in the second half of the 19th and first half of the 20th century.

“The historical trauma from the Nazi regime still has an impact on politics. Even if a politician may know that the Lithuanian public does not care about it that much, he will still say it because he feels responsibility for the past,” German Council of Foreign Affairs deputy Director, security policy expert Christian Mölling said.

He explained that for a long time it was unthinkable that German troops could be deployed where Wehrmacht troops had been due to the bad memories evoked. He notes that the countries which were invaded by Germany view this simpler and the Russian invasion of Crimea showed that the situation in Europe had changed over the past 70 years.

Germany may shift to a more active stance in foreign policy, particularly after the Russian aggression in Ukraine and signs of isolationist policy in the United States. Furthermore Berlin is gradually beginning to strengthen its military, raising its defence budget 8% this year, expecting to reach the NATO guideline of 2% of GDP by 2024, from the current 1.2% GDP.

Germany occupied Lithuania during 1941-1944, during the time the Holocaust proceeded, the Germans and collaborating Lithuanians killed over 90% of the more than 200 thousand Lithuanian Jews.

Lithuanian officials tend to avoid the topic when meeting the German troops, both for political correctness, as well as the perception of the Germans as softer occupiers than the Soviets, as well as the observed Russian attempts to employ the events for propaganda purposes.

Lithuanian military officials curating strategic communication note that Moscow seeks to capitalise on the story of German occupation and Lithuanian collaboration during the holocaust in order to raise hostility against NATO forces. Captain Gintautas Ciunis from the Lithuanian army Department of Strategic Communication points out that in some cases the arrival of German troops to Lithuania is portrayed by propaganda as a supposed German occupation.

The officer explains that the goal of this is to diminish the significance of the foreign troops in Lithuania and raise doubts on the goals of the allied presence, seeking to discredit the Lithuanian decision to accept allied troops.

Captain Ciunis goes on to describe how in Russia Lithuanians are presented as Jew killers and fascists who invite the Germans, with the situation being presented along with historic undertones. He points out examples where NATO is compared to the Nazis and German military machinery from the World War II and now is compared.

On the Russian threat, Lithuanian officers often recall the harm done by the Soviets, warn of signs of Soviet dictator Josif Stalin being rehabilitated in Moscow and urge the West to recognise Stalinist terror on an international scale.

According to diplomats, it is a sort of taboo in Germany to at all compare the Nazi and Soviet regimes, officially talks of Soviet crimes in Germany are avoided. The German government avoids vilifying the Stalin regime in part in order to avoid being accused of whitewashing the Nazi regime’s crimes.