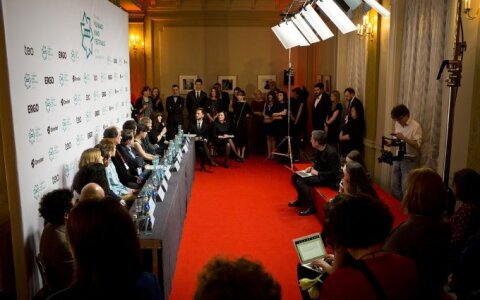 Ukrainian communities in Lithuania have criticized organizers of the Vilnius international film festival Kino Pavasaris (Cinema Spring) for including Hatred (Wolyn), a film by Polish director Wojciech Smarzowski, into this year's program.

The Ukrainians say that the film's depiction of the so-called Volhynia massacres of Poles is biased.

"The Ukrainian Community of Vilnius and the Association of Baltic Ukrainians express their disapproval of the inclusion of the film Wolyn into this year's Kino Pavasaris in Vilnius since it reflects the director's one-sided, subjective view of the past events that are painful to both nations, Ukrainians and Poles," the organizations said in a joint statement on Friday.

The film is set against the backdrop of events in 1942 and 1943, when Ukrainian nationalists staged pogroms of Poles in Nazi German-occupied Poland.

The festival's organizers say that they decided to include Hatred into the program because of the artistic value of the film, which has won awards in Poland.

"We want the audience themselves to evaluate the message conveyed by the film. Kino Pavasaris, in its 22nd year, has nurtured a generation of critical and intellectual viewers. We are very proud of them and completely trust them," they said.

In Ukraine, the film is not recommended for screening.