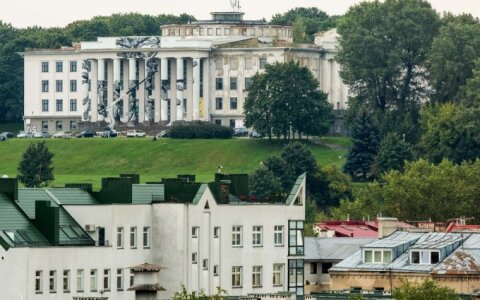 Vilnius Mayor Remigijus Šimašius has proposed building a Museum of History of Lithuanian Jews next to the Vilnius Congress.

"I think the government did the right thing to suspend the earlier procurement that lacked transparency. Without doubt, there should be a conference center. We just discussed that it would make sense to have a Museum of History of Lithuanian Jews next to the conference center or in part integrated in the conference center. The idea can be well implemented and could become an attracting pole. We agreed to develop the idea further. I am happy that I and the prime minister share the opinion on the matter," Simasius told BNS after meeting with Prime Minister Saulius Skvernelis on Thursday.

In the mayor's words, the idea is yet to be discussed with the Jewish Community of Lithuania.

"We will indeed discuss this with the Jewish Community of Lithuania, as the Jewish culture is clearly being reborn, and such a focal point would be needed," he said.

About 90 percent of Lithuania's pre-war Jewish population of around 208,000 was killed during the Nazi German occupation between 1941 and 944.