Working together for common development 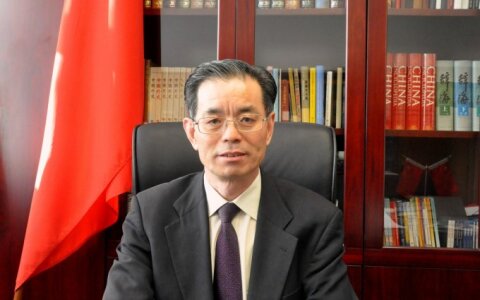 China and Lithuania, though geographically far away from each other, enjoy a long history of contacts and exchanges. More than 100 years ago, Lithuania imported yangtao or kiwi fruit (actinidia sinesis) from China via the ancient Silk Road. Ever since then, yangtao trees have been growing, flowering and fruiting on Lithuanian soil. Today, yangtao has not only enriched fruit and vegetable species of Lithuania, but also become one of daily fruits for Lithuanian people, and even a cash crop for Lithuanian export. While the wheel of history rolling on, the two nations of China and Lithuania have been keeping in close contact and enjoying exchanges and cooperation. In 1991, China and Lithuania officially established diplomatic relations, which ushered in a new era of friendly and cooperative relations between the two countries. Adhering to the principle of mutual respect and equality, and taking a strategic and long-term perspective, China always values its relations with Lithuania and has been promoting mutually beneficial cooperation for common development. During the past 26 years, China-Lithuania relations have made much headway, with frequent exchange of high-level visits, growing trade and economic cooperation, and fruitful results of mutually beneficial cooperation in such areas as culture and education, transport and logistics, agriculture and high-tech, etc. The two countries have also enjoyed fruitful cooperation and sound coordination and collaboration under the “Belt and Road” initiative and the framework of China and Central and Eastern European Countries Cooperation (“16+1 Cooperation”), and in international organizations.

At present, there is a good momentum for further developing China-Lithuania friendly and cooperative relations. There are quite a number of corresponding points between China’s “13th Five-Year Plan” and Lithuania’s “Sustainable Lithuania” development strategy. Pragmatic cooperation in the fields of trade and investment, transport and logistics, science and technology, education and agriculture between the two countries has been yielding fruitful results, bringing tangible benefits to the two peoples. In May and August of 2016, the General Administration of Quality Supervision, Inspection and Quarantine of China (QSIQ) respectively issued certificates to 15 Lithuanian companies to export aquatic products and 17 Lithuanian companies to export dairy products to China, laying a good foundation for expanding Lithuania’s export to China and for promoting cooperation in agricultural sector between the two countries. 20 tons of dairy products were delivered to China before the Chinese New Year, and more shipment of such products are following. The relevant government departments of the two countries are now actively working on the export of Lithuanian beef and wheat products to China.

The people-to-people and cultural exchanges between China and Lithuania are becoming increasingly closer, promoting mutual understanding and friendship between the two peoples. At the beginning of 2017, the “Happy Spring Festival” series---Chinese Folk Music Concert made a stunning début in Vilnius, opening a new chapter for China-Lithuania cultural exchanges. “The Silk Road, Ancient Chinese Art” Exhibition has been going on for 3 months at the Museum of Applied Arts and Design in Vilnius, attracting a large number of Lithuanian people. The performing tour by Lithuania National Ballet and Opera Theater in various cities of China overwhelmed the Chinese audience. The people-to-people and cultural exchanges at various levels and in various fields between the two countries have not only brought the two peoples closer, but also consolidated foundation of public support for sound and stable development of China-Lithuania relations.

Chairman Zhang Dejiang’s forthcoming visit to Lithuania will be the first official visit by the Chairman of the Standing Committee of the National People’s Congress of the People’s Republic of China to the Republic of Lithuania since the establishment of diplomatic relations between the two countries. This visit, which is the result of continuous development of China-Lithuania bilateral relations, will give an impetus to the enhancement of exchanges and cooperation between the two legislatures, the expanding and deepening of pragmatic cooperation in all fields and the promotion of healthy and steady development of the bilateral relations between China and Lithuania. I sincerely wish Chairman Zhang Dejiang’s visit a complete success. Let us, both peoples of China and Lithuania, work shoulder by shoulder for common development and prosperity.

Working together for common development