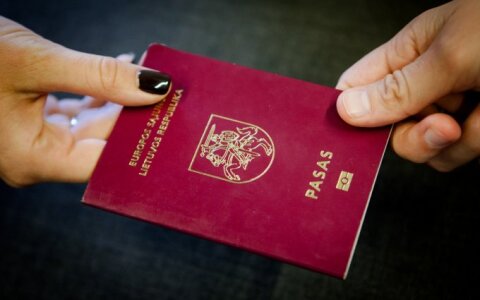 Politicians have been saying for years that the legalization of dual citizenship would become a proof that the state cares about its citizens, but from the talks for continued to progress there was not enough political will. The Parliament, this time unanimously, without sharing in with the ruling position, the opposition announced that they would legalize dual citizenship, LRT.lt reported.

The problem is that politicians are already preparing to ignore than one interpretation of the Constitutional Court of the nationality of the first Constitution section, so the provisions can be changed only by referendum.

Related articles
Sinkevičius: the question of dual citizenship can only be resolved by referendum – not in any other way
Benefits of Lithuanian citizenship from the South African Litvak prospective  (1)

Homeland Union leader Gabrielius Landsbergis’ initiative to legalize dual citizenship by changing the citizenship law was signed by a total of 114 MPs. However, he admits that he was not sure that it will be enough to change the law.

"We are not sure. We believe that this is the right path and we are ready to go, "- said G. Landsbergis.

Chairman of the Parliament and the Prime Minister also agree that the Citizenship Act would be amend.

"I am convinced that it is legal, because I put a signature and I support this bill," - said Prime Minister Saulius Skvernelis.

According to the President, it is completely different. The Constitutional Court has repeatedly explained that dual citizenship can only expand the boundaries by changing the Constitution by referendum.

"Driving a bulldozer through the Constitution should not happen," - said President Dalia Grybauskaitė.

Vilnius University, Faculty of Law, Public Law department head Haroldas Šinkūnas said that several MPs selected to legalize dual citizenship by the adoption of the Law on Citizenship. But now the situation is clear as the situation continues.

"It changes Policy Act, I have no doubt that this will happen - 114 Parliament members who contributed their signatures from the fact there are already sufficient amount, we will get a President's veto. Okay, the President's veto was rejected, we have to continue the current law, what is going on. Well, the question will inevitably appear in CT. Repealed, well, probably, forecasting the repeale of this law and extending the dual citizenship clause. The law is no longer valid. We remain underperforming, in the sense that we have a situation when in fact everything is worse than we have today, "- lamented the VU Faculty of Law, Vice Dean. dr. H. Šinkūnas.

Vytautas Magnus University, Faculty of Law, Associate Professor Aušra Kargaudienė states as well that citizenship limits are defined by the Constitution, and even the legislature implementator can not to go beyond.

"This institution is discussed by the Constitution and any law that whether its provisions if they would reasonable doubts as to the conformity with the Constitution, they should be reviewed from the CT", - said dr. A. Kargaudienė.

H. Šinkūnas says that choosing to legalize dual citizenship by changing the law would confuse people into obtaining citizenship until the Constitutional Court investigates and after such opportunities are not here.

"The resolution is also valid from the date of adoption, it is called again to be part of such citizens. We have to look at a real perspective on how we solved this issue, and we are need to finally solve it, according to certain rules and have we solved it in time? "- said VU Vice-Dean, Faculty of Law.
By the way, the Parliamentary leader of V. Pranckietis said that the Parliament adopted the Law on the Constitutional Court to accept, because previous interpretations have changed the composition of the judges. Some politicians say that the Constitutional Court's interpretations might differ from the previous one due to the changed political situation in Lithuania's accession to the EU and NATO. However, legal experts opposed to such arguments.

In order to change the Constitution to govern the citizenship of a referendum binding. It must be present and speak for more than half of the citizens have the right to vote. Such referendum could initiate policy and has long been a problem that needs to be solved. Now a referendum may lack the required number of voters. Legal experts recognize that the referendum is more difficult, so it must be properly prepared and politicians are expected to work hard, by the way, what they must do is to mobilize the public.

"We would like that even before the date of the organization of the widest possible discussion on that subject, as far as possible educated society and responding to the questions," - said A. Kargaudienė.

"In fact, I think that the Government is often considered as a small children by the public. Smart people have said that politicians in general often do not need that the society would grow. The politician is like a guardian, take care of the policies, politician will solve this, but in fact the principle in a free community should be the other - the community decides, people can decide for themselves, "- said H. Šinkūnas.