Word duel between Skvernelis and Paluckas: who won? 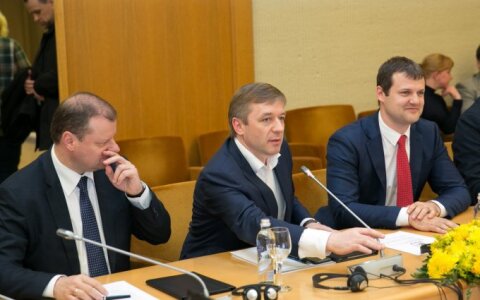 „Harsh public rhetoric from Saulius Skvernelis is not new. On the other hand, with him being the most popular politician, there is a need to get attention, and for Gintautas Paluckas, to show everyone that he's worth more than the post of the mayor of Vilnius. Therefore the latest two duels is only a public campaign and or a communication that we have not heard in a long while" - Arijus Katauskas evaluated the communication between S. Skvernelis and G. Paluckas.

After the tensions died down, a meeting between the new chairman and the Prime Minister (PM) did happen on Wednesday. However, S. Skvernelis was late for a half an hour to the joint group meeting between the Social Democrats and the Farmers. After that he invited G. Paluckas to talk face to face.

Related articles
Uspaskich – If Karbauskis bickers with Skvernelis, he will ruin Farmers’ group
PM sees no reasons for ruling coalition to break up

"Emotions have erupted (of S. Skvernelis – LRT.lt.), even though the Farmer leader and the chairman of the group Ramūnas Karbauskis stated that I don't know how the Parliament works. Well, he may teach me. But for that we need to meet. We are coalition partners and we are linked by the coalition agreement. He won't be able to ignore us" – said G. Paluckas to LRT.lt before the joint meeting.

G. Paluckas: perhaps the Prime Minister is afraid of change

Were you, after being ellected as the party leader, welcomed by the Farmer representatives?

No matter how strange that would sound, I was congratulated by the Prime Minister S. Skvernelis, and the Parliament chairman Viktoras Pranckietis. R. Karbauskis did not do that but his party added a congratulation o their Facebook account.

You say that you have experienced an emotional outburst from colleagues Farmers. However, after all, human emotions are mostly provoked by certain sympathies, anger, and hatred. What provoked those emotions?

I could describe the PM's emotions in his own words - allegedly because of the fact that I was elected to be a chairman of the Social Democrats, changed nothing at a national level. But I do think that the election of a leader in the largest Lithuanian party some kind of an event.

On the other hand, I have stressed both times, during the election campaign and after, they that the party is going to change. Because over the last five or six months a certain communication between the social Democrats and the Farmers did form.

We as the members of the ruling coalition, would like to have collegiality and equality.

But you yourself took part in forming this coalition.

I did and congratulated the Farmers that they were able to negotiate a much better position for themselves.

Negotiations for the Social Democratic were much worse. Nevertheless, the agreements must be implemented. If they don't want to adjust the agreement, then it does not have to be changed. It's not very specific, there is enough space to read between the lines.

Did you say everything that you wanted to say during the so-called public relations campaign with the PM?

Our future priorities need to be discussed in the joint meetings of the coalition. The PM doesn't want to fix the Government program. That's fine. But there are a few hundred steps in the action plan of the Governments instruments. Some of them are a priority, others aren't. We will highlight not only our goals but also those of the Social Democrats if we don't want to get stuck in a routine.

But if the lack of communication would take a long time, just like in a family, in this situation, the love disappears and in this case - the contracts and agreements of the coalition would stop working. Then it would become pointless for us to be in the coalition.

I sincerely believe that the emotions will calm down within the next couple of weeks and we will have to work together according to the goodwill and collegiality, without mentioning the values of the Social Democrats or Farmers.

What do you think that ordinary mortals, your voters, think when they see the strange communication between the PM and yourself?

We'll have to pay back with the productive work of our coalition. But what I don't want is for the Farmers to get lost in the routine of small ideas. A similar thing did happen for the Social democrats before the election. We did a lot but we did not touch the most important social issues. The voter had been punished for this. Therefore, I would advise the Farmers to pay attention to what concerns the voters and not to ethnology lessons in schools, prolonging the school year, or the alcohol ban at events.

How do you assess the fact that the Parliament meetings sometimes end before lunch or the breaks between meetings last for a few hours. Just because the MPs have nothing to do? The Parliament states that they don't receive any bills or amendments from the Government.

I hope that our political agenda will become more active with the appearance of equality and the pursuit of our Social Democratic goals. I think that the key things will be done by a joint effort.

So far I wouldn't want to evaluate the Government's performance. It's true, you can't move mountains in just four to five months. If we will lose ourselves in details, we won't notice when the elections of 2018 and 2019 will sneak up on us, and then there won't be enough political will for strategic decisions. We all know what elections mean – maybe not now, let's postpone this, maybe someone won't like the decisions, etc. Because of that, we must make the necessary decisions as soon as possible.

Was the verbal altercation useful to G. Paluckas and S. Skvernelis?

A.Katauskas, when assessing the altercation between G. Paluckas and S. Skvernelis, noticed that it was useful for both of them.

"On the one hand, S. Skvernelis, being the most popular politician, still wants to remain in the spotlight. On the other hand, the chairman of the Social Democrats G. Paluckas, whose selection was unexpected even for the Social Democrats themselves, it's necessary to prove that he's worth much more than the vice-mayor of Vilnius, and that he is capable of communicating with the PM and other leaders at the highest level ", - said a specialist of public relations.

A. Katauskas reminded that S. Skvernelis, as the Minister of Interior, communicated harshly with Loreta Graužiniene, who was the chairwoman of the Parliament, and he was criticized for this by the President Dalia Grybauskaitė herself. So today's communication with G. Paluckas is no longer surprising.

"But I would like to draw your attention to the third public relations player - Conservative leader Gabrielius Landsbergis. He perfectly exploited the situation in the Parliament and by being active on social networks to communicate with his audience"- said A. Katauskas.

"In any case this is - a public relations campaign, going against each other. It's not a big deal. Of course it's better for both sides to demonstrate a united coalition at work. After all, politicians are also human, who have emotions and a character. I would have acted differently in the place of S. Skvernelis. This behaviour reminded me the conflict with L. Graužiniene, but this time G. Paluckas won the public opinion" said Gediminas Kirkilas, an old Social Democrat, who at the time when he was the chairman of the Government and was involved in the 2K project, often got into altercations with Andrius Kubilius, who was the Conservative leader at that time.

The former PM and vice-chairman of the Parliament also found S. Skvernelis cabinet work lacking and thought that there was not enough legislations.

"In my opinion, the Government should start acting instead of being in public relations campaigns. But when there's no serious work then the integrity needs to be covered up with public relations "- said G. Kirkilas.

There is a lack of experience for high politics

Algis Krupavičius, who is a political scientist, gave a lot of criticism to G. Paluckas and S. Skvernelis. According to him, their recent rhetorical wars have proved that they both don't have enough experience to implement policies at the highest level.

"It's inappropriate to publicly argue and it should never happen. Politics at a high level require the ability to find compromise and to be a diplomat, "- noticed political scientist.

Word duel between Skvernelis and Paluckas: who won?