Mayor Šimašius is not a leader but a caretaker 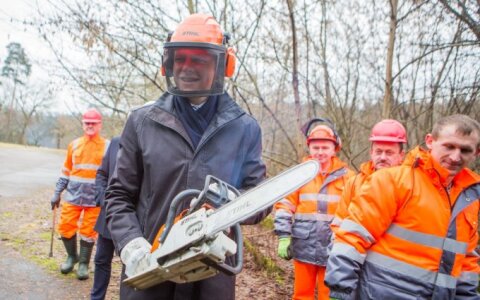 The mayors, who were elected during direct elections have already begun the second part of third term in office, as well as Remigijus Šimašius, who is the mayor of the capital and a Liberal. In cases like these it is common to assess the completed work and residents of Vilnius often are disappointed that Kaunas is improving much better, decisions are made quicker and with more certainty, LRT.lt reported.

We can often hear talks that the Vilnius municipality is slower when making some decisions and it is often that in the Council lacks a quorum and they are forced to disperse. In general, the action of R. Šimašius are evaluated differently but his main shortcoming is obviously said to be the most prominent one and that it affects his activities. Mayor of Vilnius is not a leader and generator of ideas, but rather is a doer, albeit great, but the commander of the capital too little. As one of the "Week" interviewees said he has only two years left and when they pass, „residents of Vilnius just might roll Šimašius in tar and feathers and carry him on the hill in Užupis and burn him in front of the house of Zuokas as an apology."

In the opinion of a telecommunications expert and analyst Liudvikas Andriulis, R. Šimašius is more like a caretaker than a leader.

"Thinking about R. Šimašius it is strange how he, going through the city, doesn't get mad and say that it cannot be like this. You like a rug with a burn but we still live like everything is good. <...> R. Šimašius is more of a caretaker and one that stays out of the way than a leader and action taker. He lacks the ability to come up with simple and clear things, with which he could contribute to the development of the city" states L. Andriulis.

According to Žilvinas Šilėnas, the chairman of the Free Market Institute, the mayor of Vilnius is used to bragging about simple and routine achievements.

"When something ordinary is done, if a caretaker sweeps the yard, it's posted on Facebook and sais I've done it well, that's not serious" said Ž. Šilėnas.

This is what the residents of Vilnius say about their mayor, not officials or politicians. The Prime Minister is even more categoric: a lot of the actiona are just out of inertia and during the two years in office R. Šimašius made no major changes in the capital. The only thing he did is cut a Thuja, says Saulius Skvernelis.

"City is lacking ideas, at least a normal and economical organization, in order for the planned work not to stall" says A. Zuokas.

According to the former mayor of Vilnius, the city life has stopped for two years. Most of the projects, which had to be done this year, in reality should have been done last year or even two years ago. For example, the bus park should have been updated and 100 new buses should be the streets of the capital, or the reconstruction of Vilnius street, which used to be one of the most flourishing places of the capital now has been turned into a construction site.

The manager of a salad bar, which is here, said that during that time the number of customers has gotten down by a half. Institution - social project, which helps people fight with addiction has found itsel at the end of the road because of the street repairs which have dragged on.

"As far as we talked, the situation everywhere is the same. Neighbours have closed down, a few shops have closed and have stopped working, "- says the director of bar "My Guru" Reda Sutkuvienė.

R. Šimašius doesn't see his fault about the never ending construction of a street that drew people in, the architect is to be blamed, who left errors in the project, and contractors, who offhandedly did their job. The city has sent a letter to the contractor with an ultimatum to either finish as soon as possible to complete the work or the contract will be terminated.

In general, the mayor doesn't agree with the criticism and says that almost all of the promises were fulfilled: about three and a half thousand new jobs were created in the kindergarten, the reorganization of orphanages is on the way, yards, sidewalks, and streets are being cleaned, trees planted, a western overpass had been opened, Neris embankment was cleaned up, the city debt has decreased, new jobs were created and investment brought in.

"Five key promises, which residents of Vilnius received in leaflets, that all of them, all of them were done or they are underway. Some other things that were talked about in the public was about finance, we did realize it. Or [speaking - LRT.lt] about public transport, then it's on the way. I am doing what I have promised to do and I am sure that I'll manage to do it" said R. Šimašius.

Experts say that the mayor's praise about the new jobs and the new foreign investments are quite exaggerated. The capital is already doomed for this because this is where the most ambitious people come and the investments are coming because Vilnius is the largest Lithuanian city.

Even the coalition partners are criticizing the mayor. It seems that the activity report I very poor, and the things named in it are not the merits of the mayor but everyday things that are a necessity. R. Šimašius is criticized that he presented plans that are not ambitious - streets, yards, gardens, flower gardens are cleaned but nothing memorable is done.

"There are no tangible things which could be significant. We do have the difficult things, in regards to the building of a National stadium, the municipality is not the only one who is responsible, but there is stagnation in other massive investment projects, which would show that Vilnius is capable of going to the next level. Unfortunately, in the last the two years things did not make progress "says the Valdas Benkunskas, the Deputy Mayor of Vilnius.

After receiving praise for eliminating the taxis of the municipality, R. Šimašius is criticized for developing municipal businesses.

There's a feeling in the capital, state the critics, like the mayor is blind to the fact that while driving the poor road in the Iron Wolf Street (Geležinis Vilkas Street) it feels like you're going on wooden wheels, that you spend an hour or more in traffic, that public transport is far from modern and Western, and that we won't have a pool. Residents of Vilnius want a leader and a manager solve problems and not look for someone to blame.

"Probably, the head of a larger company would have been thrown out long ago for a project like Vilnius Street or the taxi situation in Vilnius taxi where Valiera can give a lift to the Parliament for 20 euros. Because R. Šimašius doesn't talk about what he'll do, he talks how he'll meet someone that the Ministry is to blame, "not my responsibility". This is a true bureaucratic push of responsibility from one's self "- says L. Andriulis.

During the first elections for the mayor, R. Šimašius received a lot of confidence still has a couple of years to go. Then it will be clear how residents of Vilnius will assess his work. The prognosis right now gives little hope.

"If everything goes as it is happening now, he won't be punished, just forgotten" thinks the analyst.

Mayor Šimašius is not a leader but a caretaker