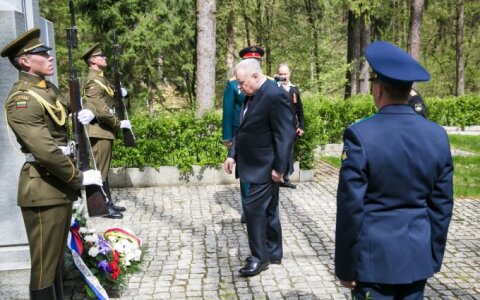 The majority of Russians celebrate May 9th which is a Victory day: Moscow is shaken by a massive military parade and crowds of people go to the cemetery to lay flowers on military graves of World War II, thinning ranks of veterans are greeted as well. Vilnius is not an exception, where Antakalnis cemetery is flooded with hundreds of people carrying flowers. But the day before something unexpected happened in here.

Differently than in Russia or some post-Soviet countries, the West commemorates the end of the World War II in Europe on the 8th of May. In the evening in 1945, the Nazi Germany surrendered in the war, which took more than 60 million lives.

But during the capitulation, it was already the 9th of May in Moscow, and this is the day that remained in the minds of the many post-Soviet countries, it became the day to honour the victims, national pride, demonstrations of military power in its own way and interpreting history in their own way.

Unexpected action of the ambassador

Although the military cemetery, which is in Vilnius Antakalnis, is visited by hundreds of people on the 9th of May, the day before it was quiet and peaceful. The peace was disturbed, by a visit of official Lithuanian, foreign officials and diplomats.

Just as on every year, on May 8th Antakalnis cemetery is visited by the Lithuanian Government or its representatives, and near the memorial to Soviet soldiers Lithuanian military's honour guard soldiers fall into rank and pay tribute to the Soviet soldiers, who are buried in here.

From the Lithuanian point of view, the end of World War II in Europe on May didn't end the conflict, as for more than a decade there was a guerrilla war happening in Lithuania but those, who died are still honoured by both sides every year, despite the fact whether the relations between Moscow and Vilnius are strained or not.

Wreaths and flowers are brought not only Lithuanian representatives but foreign country representatives as well, and mostly by the Russian diplomats and military personnel. However, this year representatives of Kazakhstan, Polish diplomats, attaché and delegates of the United States, Ukraine, Georgia and other countries, military also showed up with flowers.

But this year the Russian Ambassador Aleksandr Udaltsov surprised with a modest ceremony. He was the first one to lay a flower wreath on the memorial for the Soviet soldiers, and later Kazakhstan Embassy representatives did the same, and just after them a Ukrainian defence attaché, whose relationship with Russia is strained.

However, what happened next surprised the representatives of the Lithuanian delegation because the Russian ambassador with the entire delegation went to another monument, which is only a few hundred meters away, the monument to those, who died for Lithuanian freedom. 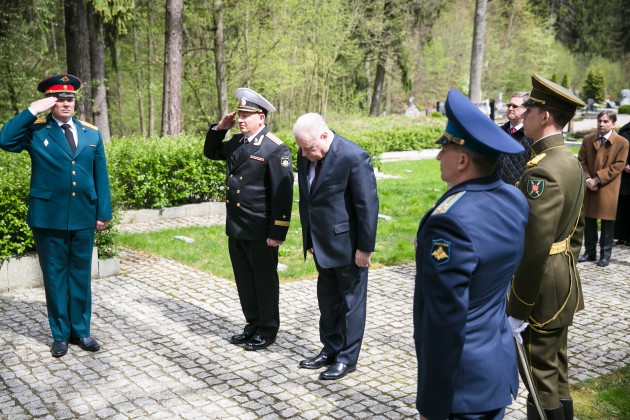 "We were surprised and we didn't expect this, it seems that this is the first time that this has happened" said Arnoldas Pikžirnis, who is the advisor of the PM and was there during the.

"I was pleasantly surprised that placed wreath or flowers in all of these places. This is a symbol when victims are honoured. And they did it on their own initiative. We spread the information to foreign embassies that Lithuania is organizing an honouring ceremony for the victims of World War II. We left them to choose and they did that." said Salvina Taukinaitienė, the head of the Protocol division at the Ministry of Defence.

Sculptor Kazys Venclova created a monument, which was unveiled in 2015, it is dedicated to all the Lithuanian military personnel, who died during the guerrilla war, in exile, in prison and whose burial place is unknown. The inscription on it reads: "For those, who died for their country. Their graves are known to God." In the site, which is dedicated for a military graveyard, there are designed spots, where soldiers killed in the action, generals, military commanders, and Defence Ministers can be buried.

Ambassador Udaltsov not only laid a wreath but also bowed in respect in front of the monument, which is primarily for the Lithuanian guerrilla that fought against the Soviet Union. Officially, Moscow states that the activity of armed groups against the Soviet Union is illegal and Lithuanian guerrilla is mostly called nationalist groups or just bandits.

Furthermore, the staff of the Russian Embassy also put flowers on the graves of victims of 13th of January 13 civilians were killed and hundreds injured in 1991, January 13th, when the Soviet military stormed the television and radio tower and the building of Television Committee.

Lithuania states that this action of the Soviet military considers a crime against humanity, which was carried out to organize a coup. But Moscow refuses to extradite the suspects of 13th of January to Lithuania and even blame Lithuanians themselves.

Nearly every year Kremlin propaganda channels repeat that "they were shooting at their own", supposedly, the Lithuanians that were killed near the TV tower were killed by the mystical bullets fired by "Movement snipers" people were deliberately being pushed under armoured equipment, and bodies of the dead were supposedly changed with the ones, who were killed in accidents before.

Finally, the ambassador of Russian visited the Paneriai Memorial, where he gave his respects to the victims of the Holocaust, the Poles, the guerrilla that fought against the Soviets in World War II, and the Lithuanian Local Guard that was created to fight against the Red Army. Here, the representative of Russian Embassy's Protocol Department officials laid flowers as well.

What does the unexpected initiative mean, which cannot be explained by the usual diplomatic protocol? Is it compatible with the official Moscow position and if it is, then is it the first step of Russia to give a peaceful hand to Lithuania?

If the official Russian bowed to the victims of January 13, monuments for Local guard and guerrilla, exiled people, does this mean that Russia recognizes the Soviet crimes that were denied for years? Perhaps Russia is ready to reveal the graves of the tortured and executed Lithuanian guerrilla chiefs and return their remains? These questions DELFI asked the Russian Embassy in Lithuania. We will add once we receive the answers.

The ribbons are seen as a provocation

However, in all three cases, the gesture can leave people bitter because the flowers put on the monuments to those, who died for the freedom and the graves of victims of January 13th , had St. George ribbons tied to them. These orange and black striped ribbons were started to use massively in Russia since 2005.

According to some sources, it was the response to the Orange Revolution in Ukraine, where the colour orange became the symbol of protests. In Russia the symbols became almost sacred after the established St. George motives in 1769 and the veterans of World War II are honoured with it.

But after the protests in Ukraine in 2014 protests in Ukraine, the "anti-Maidan" movement that was supported by Russia chose the symbolic of St. George. Due to the similarity with the Colorado potato beetle, they got the epithet of "koloradke".

When Russia took the Crimea from Ukraine and started military actions in eastern Ukraine, the ribbon got the meaning not about respecting veterans but opposite – the military aggression of Russia.

And although the symbolic with St. George motifs is not prohibited in Lithuania, it is not liked in many places and associated with the Russia's aggression. Only the distribution or demonstration of Nazi and Communist symbols is prohibited in Lithuania, while St. George symbols, which is "improved" by of some Russians with the communist hammer and sickle or even some motifs of a red star.

"Yes, the ribbons aren't prohibited but that's a symbol of aggression against a sovereign state and we see the use of it as provocation" is stated in the response of the Lithuanian Military to DELFI.