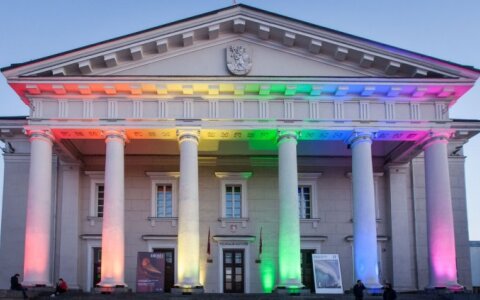 IDAHOT (International Day of Homophobia and Transphobia), celebrated around the world on May 17, was also commemorated by the most prestigious Lithuanian institutions. In addition to Vilnius Town Hall being lit up in the colours of the rainbow, the gallery of the Lithuanian Parliament hosted an exhibition of Lithuanian LGBT+ community portraits taken by Samanta Matuizaitė (ARCANA FEMINA), organisers announced in a press release.

The exhibition comprises 21 photographs selected from a book Lithuania Comes Out: 99 LGBT+ Stories, compiled by photographer ARCANA FEMINA together with author and filmmaker Romas Zabarauskas. The photos exhibited in the Seimas Gallery depict a diverse group of subjects: Rimvydas Baltaduonis, Chairman of the Lithuanian World Community Commission; spouses Auris Jarašūnas (Lithuanian) and Robbie Sutton (American) married in the US; Neringa Dangvydė, a specialist of children's literature; Oskaras Česynas, a young trans man who has recently re-emigrated to Lithuania, and many others. These people differ in their professions and circumstances, but are united by their wish to lead an open and dignified life.

Aušrinė Armonaitė, a Liberal MP who initiated the exhibition, argued that the Parliament must become a place where a wide variety of societal groups are represented, and that this artistic exhibition is a useful tool for that aim. "I hope the exhibition will encourage Members of Parliament and the general public to hear the concerns of the LGBT+ community, including widespread bullying, the absence of the institute of same-sex partnership, as well as the many discriminatory initiatives that have been tabled in Parliament for so many years," Ms Armonaitė said. Opening the exhibition, Liberal MPs Aušrinė Armonaitė and Viktorija Čmilytė-Nielsen revealed plans to introduce a new gender-neutral partnership bill within the next month.

While Lithuania still struggles to change discriminatory legislation, the LGBT+ community are becoming more open every day, and the broader civic society is becoming more open and accepting. The organisers of this LGBT+ exhibition hope that this too will help to change homophobic and transphobic tendencies in Parliament as well as in broader Lithuanian society.