Poll: Kaunas Mayor Matijošaitis' popularity is on the rise 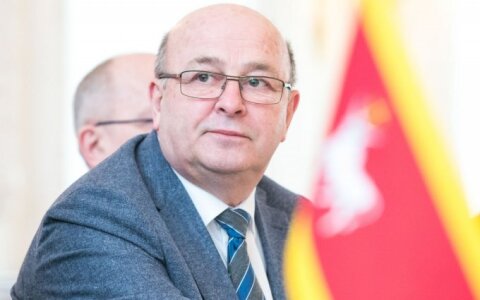 The ratings of Kaunas mayor Visvaldas Matijošaitis are growing, Vladas Gaidys, who is the director of public opinion and market research centre „Vilmorus" said to LRT radio. This politician rose from the sixth place to fourth. Also, residents of Kaunas are especially favourable to V. Matijošaitis, about 75 per cent sees him in a positive light, LRT.lt announced.

How are the party ratings distributing?

The order hasn't changed. In the first place - Lithuanian Farmers and Greens Union, in second - Homeland Union-Lithuanian Christian Democrats, then - the Social Democratic Party, the Liberal Movement, Order and Justice". The parties surpass the barrier of 5 per cent.

Related articles
Popularity of ruling party on decline - poll
What is V. Uspaskich up to now?

The number of people that say who they'll vote for decreased by 6 per cent. This means that there is a disappointment in the parties and their activities. The most points in ratings were lost by Farmers (3-4 per cent). This is the fifth month in a row when their rankings are decreasing. But theirs were so good that they still remain first. Ratings of other parties didn't change much.

How are party chairmen evaluated? Whose rating fell and who's increased? Why is the opinion of respondents changing?

The opinion of respondents is changing in response to various events: what the Government is suggesting, what new forms appear and other things. In the first place the PM Saulius Skvernelis has been for a long tome the King of the Ratings. However, this time, after a long break, President Dalia Grybauskaitė is in the first place. S. Skvernelis lost about seven rating points.

Ramūnas Karbauskis lost even more. Positive response in April was expressed by 39 per cent and now it's 32 per cent. Negative rating of R. Karbauskis has also increased. The rating of Minister of Health Aurelijus Veryga as well as the rating of the Government also decreased. It can be seen that they are responding to innovation.

In my opinion, this is because of the Labour Code because it wasn't clear enough and people don't find flexible employment acceptable. Perhaps the debate on school holidays added to this. The survey showed that those that have kids don't want holidays.

It seems, that it was conducted at a time, when there were many discussions about restrictions on alcohol consumption?

Yes. We included the question on restrictions. People are in favour of some things and don't agree with others. Maybe they would accept bans on advertising, shortening the time of sales, higher age limit. Except the people, who are directly concerned (they are opposed, older people agree).

The increase of prices is opposed the most: 65 per cent oppose and 22 per cent support the idea. The also oppose specialty stores and that alcohol wouldn't be sold in events.

This means that as soon as the Government is considering and making unpopular decisions, people's view is changing instantly?

The leader of Social Democrats Gintautas Paluckas participated in the polls for the first time as the leader of the party. What's his rating?

He comes to the ratings as the leader of Parliament party. He is seen positively by 18 per cent and negatively by 16 per cent. The numbers aren't big because half of the people still can't talk about him, still don't know. His rating is faint so far. We can assume that it will become more visible in the near future.

What's the most surprising in this survey?

The aspect to the institutions is pleasant. Trust in the courts is the highest since 1998. Now 31 per cent trust the courts, 21 per cent don't. Recently the balance has been positive.

The tendency to trust the courts is growing every year, starting with 2011. Apparently, it is not an accidental trend. The public believes that the authorities are improving.

You say that the trend is not accidental. Were there specific changes in courts? Why do you think their ratings are rising?

My starting point are the Western democratic countries, where life has been better for many years. The courts are trusted more there. Apparently, we should focus on that, if we're going in the right direction then something in the society is improving.

The growth of Court support stopped during the so-called Garliava story that lasted for many years. Courts and judges then had a negative connotation. The newly founded party also had long-term negative effects. This time things are turning for the better.

You mentioned that the ratings of Mayor of Kaunas Visvaldas Matijošaitis are increasing.

Looking at all politicians that were rated, D. Grybauskaitėis in the first place, second - S. Skvernelis, third - Viktoras Pranckietis. In fourth place - V. Matijošaitis. 46 per cent of the Lithuanian population sees him positively and 18 per cent negatively. In terms of Kaunas, even 75 per cent of Kaunas residents that were interviewed evaluate him positively. It's a very high result.

The survey was carried out by the commission of "Lithuanian morning".

Poll: Kaunas Mayor Matijošaitis' popularity is on the rise