Tension is growing: Kremlin's friend Bastys can drag others down with himself 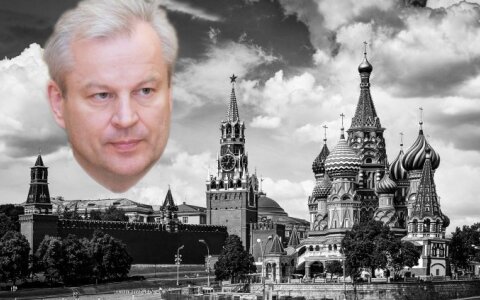 The Parliament's Special Investigation Commission is going to present an assessment if there are grounds to initiate impeachment process against Social Democrat Mindaugas Bastys, who is suspected to have non-transparent ties with Russian actors.

As Agnė Širinskienė, a representative of Lithuanian Farmers and Greens Union (LVŽS) and head of the Special Investigation Commission M. Basčio impeachment proceedings, said to DELFI they hope to vote on the findings on Wednesday. "Then the conclusion will be registered publicly. It is likely that this will be done on Thursday or Friday morning. After that, the question will go to the Plenary Chamber. I think that the question won't go to the plenary meeting earlier than next week" she explained.

When she was asked whether the study material can have information not only about M. Bastys but also about the links of the Lithuanian Social Democratic Party (LSDP), A. Širinskienė said that the temporary commission didn't investigate the broader context, they discussed only the relations of specific Parliament member.

However, the head of the commission mentioned that the material that is being prepared should be read carefully. "The study of a party was not our object but you will see the record research because MP M. Bastys asked to reveal everything. You will be able to judge from what is in the public part and how it's related (to the Social Democratic Party - Telegraph) and what's not. I wouldn't want to comment until the conclusions aren't published" explained A. Širinskienė.

Saw a threat to national security

The parliamentary Committee of National Security and Defence (CNSD) that investigated the actions of the former Parliament's Vice-President M. Bastys, who after suspicion suspended his membership in LSDP, on the 18the of April announced that this politician acted against the interests of the Lithuanian state, his relationships pose a threat to Lithuania's national security and people with whom he had close ties, wanted to change the geopolitical direction of Lithuania. M.Bastys himself called all of the accusations rumours and emphasized that he didn't act against the Lithuanian state or betray it.

Back in March the Committee examined the data given to the Parliament's Chairman Viktor Pranckietis given by the State Security Department (VSD) that describes the M. Bastys relationship with the representative of the nuclear energy corporation "Rosatom" who previously was an actor in active Russian diaspora in Lithuania Jevgenijus Kostina, a former KGB officer Piotr Vojeika, who operated through "Dujotekana", that was established in Lithuania by the Russian concern "Gasprom", pro-Kremlin Russian journalist in state channel RTR Ernestas Mackevičius, former Kaunas mafia authority Saturnas Dubininkas and Vadim Pachomovo, who is suspected of illegal activities.

After the conclusions of the Committee that was the basis to resume M. Bastys impeachment process, some top representatives of LSDP actively defended him. Social Democrat Juozas Olekas, who participated in the investigation, told the LSDP Board that M. Bastys had no interest to act against the interests of the Lithuanian and encouraged everyone to "back up their friend".

CNSD Chairman Vytautas Bakas, when speaking to DELFI said that it's possible to raise the question what the Social Democrats are seeking with these statements. "Of course, they intend to diminish the process itself, which unlike the opponents say is very serious. I think that the official conclusion that the representative of an influential ruling party had close ties with the Russian intelligence community, the people from the world of organized crime, that there were obvious ties to favour a Russian company, whose interests are radically different to Lithuania's interests, aren't funny. All this is clear and based on facts" said the politician.

According to him, now it's difficult to say why some Social Democrats also actively back up M. Bastys.

"On the one hand, the conclusions of the Committee in the beginning were a shock to colleagues. Now there is an attempt to diminish them because the people, who read this conclusion, see that the party leadership probably had information what M. Bastys had been doing. There were conditions to act. For example, there was authorization to work with classified information, although in principle there was no need, high offices were appointed – chairman of Information Society Committee in the Parliament, the Prime Minister Advisor. I know how people are appointed to political office – it's not done easily, the decisions are made by the party, on the management level. In fact, I think some people in the party still hope that it will be possible to play down the issue of the upcoming impeachment and it may be successful" said chairman of the NSGK.

The Social Democrats, who are currently fighting in the scandal of M. Bastys, aren't trying to break to break ties with his environment. The new Social Democratic Party Chairman Gintautas Paluckas, although said that he is disappointed that the situation of M. Bastys will harm the party, at the same time decided suggest Raminta Bastytė as one of his deputies, who is the niece and ward of M. Bastys, who has been active for many years in the Šakiai division of LSDP led by her uncle.

When speaking to DELFI R. Bastytė said that the party didn't discuss how to behave after the the commission will publish the conclusions. "If my personal is suitable I can say that I am sad and hurt by all of these events. Especially because M. Bastys has already proven his innocence because the prosecutor's office refused to continue the investigation. And what is happening in the Parliament is just politics and nothing more. This isn't serious" she explained.

When she was asked whether, she worked in the Šiauliai division of Social Democrats with her uncle, had she no suspicions that M. Bastys activities is inappropriate, she said: "You have to agree that the most important thing is the content of communication and not the fact that you communicated. I think that many people communicate with someone.

Does this mean that she knew about her uncle's contacts? R. Bastytė explained that she didn't know about the actions of those people. "It was not my circle of people" she said.

However, the politician admitted that she knew some of them. "Just one. I just met him. But it's not written the forehead. On the other hand, some of the allegations aren't proven. It seems funny to me. Moreover, what the Conservatives are speaking, especially Andrius Kubilius, who was directly funded by "Dujotekana", then what are we talking about" said the new vice-president of the Social Democratic Party.

R.Bastytė was surprised that everyone thinks that M. Bastys had financial benefit from the publicized relations. "There was no such thing. It's just taking care of the person, who was potentially very strong and was presumably seen as a risk. And now if negative conclusions will be adopted, which is unlikely according to all the actions, the man's reputation and everything else is still damaged" she explained.

Discussed in a secret meeting

DELFI sources in the Parliament stated that the parliamentary findings that are still undisclosed suggest that M. Bastys contact with the actors, who sought to steer the direction of Lithuania's development from the Western to the Eastern side, could have been known by the top of LSDP.

About this situation of how serious could be the involvement of the Social Democrats in the scandalous process, the respondents said that it was discussed in early May during a secret meeting organized by the Chairman of the Parliament V. Pranckietis with the leaders of VSD and the Special Investigation Service (STT).

"It was during this meeting it was being decided what to do about the parties' relations, why M. Bastys suspicious connections that may have been known by the leaders of the Social Democratic Party have been tolerated for so long, about some aspects of financing, which could be associated with Russian money and etc. It's possible to investigate but if it was started, it could cause turmoil, set people against each other and it's still unclear what would be the result" respondents said to DELFI.

They argue that if the Parliament still decides to go deeper into this question, "there would be things to investigate".

Certificate hero linked to the left

The fact that the actors that surrounded M. Bastys had contacts with other representatives of LSDP is publicly announced more than once. First party relations with J. Kostin are mentioned, a former head of the Department of Russian Philology at Vilnius University, the founder of the illegally functioning Lithuania Baltic Humanitarian Centre that was later renamed the International Baltic Academy (TBA, Russia supported operating Riga Baltic Russian Institute branch), he got into the sight of the security services.

As stated by the magazine 'Ekstra" in 2006, which analysed the creation of TBA, J. Kostinas was not only member of academia but the Social Democratic Party led by Algirdas Brazauskas. He was seeking for the support of this party in order to legalize the TBA, which experts say was taught by Russian ideological programs and Moscow was seeking the it would be studied by as many people working with secrets.

In 2003 Social Democrat Vice-Minister of Education and Science Rimantas Vaitkus initiatives on Higher Education Amendment Act, which was passed by the Parliament in urgency helped achieve the goals of J. Kostinas. Only in case of a massive scandal the activity of TBA, who admitted students for two years, was suspended.

A sequel of V. Pociūnas file?

Now J. Kostinas is mentioned as lobbyist of a Russian energy company "Rosatom" who takes care of the image of the Belarusian nuclear power plant in Astravo. VSD conclusions state that even in 2013, M. Bastys under the request of J. Kostin seeked to organize the meeting of the director of "Rosatom" division "Rosatom Overseas" for Eastern Europe Alexandr Merten with the Prime Minister at the time Algirdas Butkevičius and set up a secret meeting with the then Chairman of the Parliament Vydas Gedvilas.

This idea wasn't realized but some Social didn't hesitate avoid expressing surprising comments in public. European Commissioner and Social Democrat Vytenis Andriukaitis, who is responsible for health and food safety, while visiting Lithuania in May this year said that Brussels has no evidence that Belarus, who is building a nuclear power plant on the border with Lithuania, doesn't care about its safety. Lithuania on an international level declares that the builders don't guarantee nuclear safety standards.

Vice-President of the NSGK and Conservative Rasa Juknevičienė when evaluating the situation on her Facebook account in April announced that the current situation reminds her of the Parliament investigation of VSD activities, when security officer Vytautas Pociūnas suspiciously died in Brest.

"I participated in the investigation. We have found a partially taken over structure. I found the same names in this investigation (on M. Bastys activities - DELFI). So, my current investigation is somewhat like the second movie in the series. Not everything is declassified so I won't say more wrote the MP.

She said that the current investigation on M. Bastys activities reveals how was specifically acted through which people and parties. "It only partially reveals but the broader picture can be assembled after analysing the whole context of those days. <...> Today's decision of the Social Democrat Group to defend the friend of Kremlin's intelligence M. Bastys means one thing - if M. Bastys is telling the truth, we should investigate the others as well" said R. Juknevičienė.

Tension is growing: Kremlin's friend Bastys can drag others down with himself